Zelda Wiki
Register
Don't have an account?
Sign In
Advertisement
in: Pages with reference errors, Enemies, Reptilian Enemies,
and 6 more 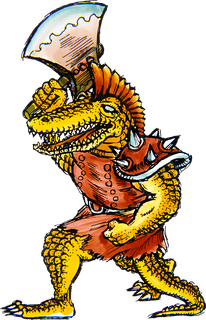 Captain N: The Game Master
The Legend of Zelda (Valiant Comics)
The Faces of Evil
The Wand of Gamelon
Cadence of Hyrule

Daira are recurring enemies and Sub-Bosses in The Legend of Zelda series.[1][note 1] They are expert axe-throwers, and their axes are able to slice through most Shields, making them more dangerous than those enemies who wield conventional swords or spears.[3]

Dairas are very commonly encountered in the tunnels and caves riddling Death Mountain in The Adventure of Link, and even on bridges in the surrounding area. The orange variety will simply charge at Link to attack him, to which he should attempt to attack his feet where possible, or simply keep striking to keep the gator warrior at a distance. The red varieties actually hurl their axes at Link with an endless supply, making them deadly at long range as well as close range. Sometimes defeating these foes is too much for Link even with the Shield Spell, so simply running away is not a bad idea.

According to the official The Legend of Zelda website, Dairas are a hybrid of Hylians and alligators.[2]

Dairas appear throughout various issues of The Legend of Zelda comics by Valiant Comics published by Valiant Comics. They are identical to their artwork depiction of The Adventure of Link and are capable of speech, although they speak poorly.[4] Dairas first appear in the "Missing in Action" story of the first issue as they are chasing Princess Zelda through the Midoro Swamp in an attempt to take the Triforce of Wisdom from her.[4] Just before they have a chance to attack Zelda, Link rushes in to the scene and defeats them swiftly with his Sword. In "Coming Home", Shadow Link commands one of the Dairas to execute both Link and Queen Seline for treason, although he is stopped by the queen before he is able to do so.[5]

Dairas appear in both The Faces of Evil and The Wand of Gamelon. In both games they appear in two strategic versions: a running version that will only drop 1 Ruby upon defeat, and a squatting version that throws its axe and drops 5 Rubies. In The Faces of Evil, there is a red-colored variety known as a Fire Daira which only appears in volcanic areas, such as Crater Cove and Firestone Lake. They are immune to all weapons except Snowballs, which defeats them in a single hit. Fire Dairas tend to drop Firestones after being defeated.

Daira appear as minibosses in Cadence of Hyrule. They attack with their axes, swinging it down 2 squares in front of them, damaging even faraway enemies.

Dairas in The Legend of Zelda series
Community content is available under GNU Free Documentation License unless otherwise noted.
Advertisement