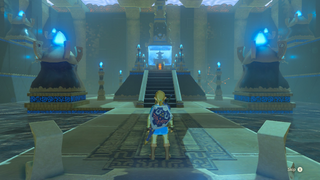 The Dagah Keek Shrine,[1] designated by the Trial name Dagah Keek's Blessing,[1] is an Ancient Shrine in Breath of the Wild.

Dagah Keek Shrine is near the pool at the bottom of Veiled Falls in the Lanayru Great Spring. Initially the Ancient Shrine is buried underground. It is possible for Link to gain access to the Shrine at any time. However, after freeing Divine Beast Vah Ruta, he can get hints about the Shrine by talking to Laruta, who can be found singing in front of Mipha's Statue in Zora's Domain.[2]

Link can get more information by talking to Trello, who has accidentally dropped the Ceremonial Trident, a replica of the Lightscale Trident, on the way to have it examined by Dento.[5] If Link finds the Trident and brings it back to Trello, he claims that it has the same power as the Lightscale Trident and can lead a hero to the Trial mentioned in the Champion Festival Song.[6]

Later, Trello will remember the lyrics and note that there is a pedestal at Veiled Falls like the one Mipha's Statue is on.[7][clarification needed] Trello then states that the legend implies that the Lightscale Trident should be thrust into the pedestal, replicating the pose of Mipha's statue, and although nothing happened when they tried this, it might work for someone with the Champion's talents.[8]

At Veiled Falls, the pedestal will activate if Link thrusts either the Lightscale Trident or Ceremonial Trident straight down into it by attacking while using the Paraglider. Activating the pedestal causes the Dagah Keek Shrine to rise from beneath the ground, completing the Shrine Quest.[9] As Link enters the Ancient Shrine, he is greeted by its Monk, Dagah Keek, who states that merely being able to enter the Shrine is proof of his worth.[10]

Dagah Keek Shrine features no puzzles, simply a direct path to Dagah Keek. Along this path is a Treasure Chest containing a Silver Rupee, which is worth 100 Rupees. As Link approaches Dagah Keek, the Monk will give him a Spirit Orb for reaching the Shrine,[11] and will wish Link well before fading away.[12]