Zelda Wiki
Register
Don't have an account?
Sign In
Advertisement
in: Enemies, Traps, Enemies in The Wind Waker,
and 2 more 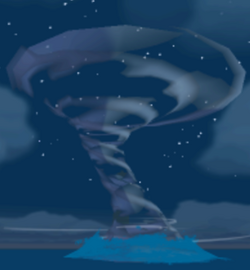 A Cyclone from The Wind Waker

Great Sea
World of the Ocean King
Cyclones,[1][2] also known as Whirlwinds,[3] are recurring Objects in The Legend of Zelda series.

Whirlwinds appear in The Legend of Zelda whenever Link plays the Flute. A Whirlwind will appear and Warp Link to any Underworld Dungeon he has completed.

In The Wind Waker, the deity Cyclos harnesses the power of cyclones. After his monument in Dragon Roost Island was destroyed, he dedicated his life using his control over cyclones to wreak havoc on all who encountered him.[4] Link can find Cyclos in a giant cyclone throughout various islands of the Great Sea. If he sails close to it, Cyclos will draw him in, giving the hero a slim chance to defeat him with his Bow before being blown away into another part of the Great Sea. If Link succeeds in shooting three Arrows at Cyclos, he will be impressed with his skills and teach him the "Ballad of Gales," allowing Link to use the deity's cyclones to warp to different islands.[5][6]

In Phantom Hourglass, the smaller cyclones hurt Link's ship if he sails into them. They can be destroyed if Link shoots them with his cannon two times.

The bigger cyclones are rarer to find and mostly serve as obstacles to impede Link from accessing certain islands. To make the cyclones disappear, Link has to complete certain dungeons or obtain specific items, such as obtaining the Regal Necklace to eradicate the cyclone preventing entrance to the Isle of Ruins. If Link obtains the Cyclone Slate and has the necessary symbols from the Golden Frogs, the hero can ride a cyclone to warp to a different sector of the World of the Ocean King by drawing the correspondent symbol.