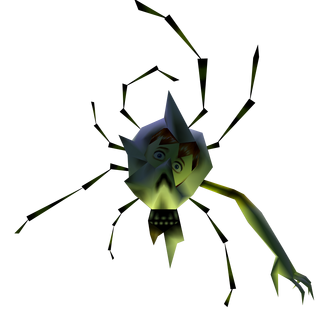 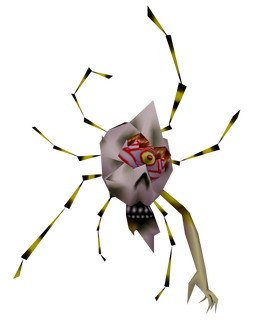 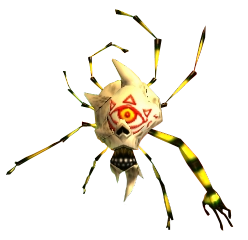 The Cursed Rich Man is a recurring character in The Legend of Zelda series.[1] He was cursed by various means into a Skulltula because of his greed.[2][3]

In Ocarina of Time, the Cursed Rich Man and his five sons, who are also cursed by Ganondorf, reside within the House of Skulltula in Kakariko Village. They were once excessively affluent, but they fell to a curse because of their greed and were forced to assume the form of Skulltulas.[2] Upon Link's visit, the father explains that the only way their curse will be lifted is if all of the Gold Skulltulas around Kingdom of Hyrule are destroyed and their Tokens are collected.[4]

The man persuades Link to help them by promising the young hero great riches if the father and his sons are all freed from their curse.[5] Link must seek out and destroy the 100 Gold Skulltulas to restore the family back to its former state. Link earns their grateful rewards each time he destroys the Gold Skulltulas in intervals of 10, 20, 30, 40, 50 and 100.[6]

In Majora's Mask, the Cursed Rich Man was cursed by the Swamp Spider House.[7] According to him, someone told him that he could become rich by visiting this House and gave him the Mask of Truth. The person said that the instructions to become rich were written somewhere in the Spider House, but as the man went in to go look, he befell a curse and turned into a Skulltula-like creature.[8] The only method to lift the curse is for the 30 Gold Skulltulas in the house to be killed and their Spirits harvested as proof of their defeat.[9]

After all 30 of the Gold Skulltulas are defeated and the curse is lifted, the Cursed Rich Man will give Link the Mask of Truth.[10]

In Majora's Mask 3D, defeating all 30 of the Gold Skulltulas a second time will earn Link a Fishing Hole Pass, and the Cursed Rich Man states that he will get rid of the Mask of Truth.