Zelda Wiki
Register
Don't have an account?
Sign In
Advertisement
in: Enemies, Living Corpses and Disembodied Enemies, Blins,
and 6 more 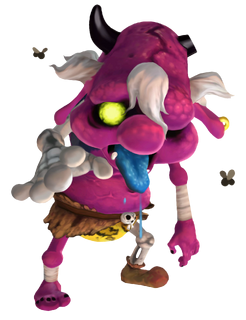 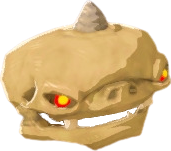 Breath of the Wild
1

Cursed Bokoblins are recurring Enemies in The Legend of Zelda series.[1][2] They are an undead variant of Bokoblin though their appearances differ between games.

Undead whose hatred accords them the ability to reanimate, Cursed Bokoblins take on a decaying appearance — with skeletal and bandaged arms, glowing yellow eyes, and chipped horns — and this is further exemplified by the flies swarming around them. They are primarily encountered in the deepest depths of the Ancient Cistern, though they also appear in the Sky Keep. If Link is nearby, Cursed Bokoblins will emerge from the ground in large groups and pursue him, attacking by latching onto Link and biting him. In addition to dealing damage, their bite also places a Curse on Link.

Cursed Bokoblins recoil from shiny objects, which Link can exploit by holding up either his Goddess Sword while it is charged with the Skyward Strike or the Sacred Shield (or one of its upgrades) to keep them at bay.[3] Cursed Bokoblins can withstand many blows before succumbing, and they often get back up. Using Bombs or performing a Fatal Blow will instantly defeat them, at which point they may drop an Evil Crystal.

Cursed Bokoblins appear in Breath of the Wild as floating heads, similar to Bubbles, and are spawned from Malice. They are only found within the four Divine Beasts and Hyrule Castle, charging at Link if he is within range. The only way to stop Cursed Bokoblins from spawning is to destroy the eye that is creating them.

Curse Bokoblins reappear in Hyrule Warriors: Age of Calamity, spawning when Stalkoblins are defeated. They follow the player around and charge at them. Unlike Breath of the Wild, they are not spawned from Malice and can be permanently defeated.