This article is about the playable Giant Cucco from Hyrule Warriors.

Cucco's Fury is unlocked after clearing Survival Mode Lv. 3 of Ganon's Fury with an A-Rank. Like Ganon, Cucco can only be played in Cucco's Fury challenge mode. Unlike Ganon, it has a limited moveset and no Boss Attack Items.

Outside of Cucco's Fury, it makes a minor cameo appearance as part of Lana's Special Attack for her Summoning Gate moveset. 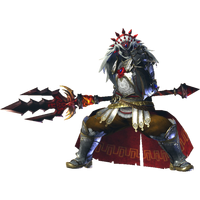 Though it is not playable, it still appears as part of Lana's Summoning Gate moveset.

Being a Cucco, it is unable to use items and has a very limited range of attacks. It attacks consists of only a two-hit pecking attack as its normal combo and a tackle as its Strong Attack. Its Special Attack summons flocks of Cuccos to stampede enemies around a wide area.

Retrieved from "https://zelda.fandom.com/wiki/Cucco_(Hyrule_Warriors)?oldid=539694"
Community content is available under CC-BY-SA unless otherwise noted.