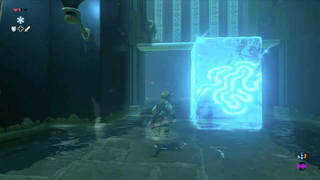 Creating pillars of Ice on Water
Cryonis is a Rune in Breath of the Wild.[1]

The Cryonis Rune is obtained in the Keh Namut Shrine on the Great Plateau. It allows Link to spontaneously create pillars of Ice from the surface of any body of Water, including Waterfalls. Link can create up to three pillars at once; raising a fourth one breaks the first. In addition to creating pillars, Cryonis can also be used to break these pillars as well. After using the Cryonis Rune to create a pillar, a timer gauge will appear which must fully restore before Link can use it again.

Divine Beast Vah Ruta and Waterblight Ganon are capable of summoning Cryonis pillars as well as spiked balls of Ice. However, like all other Cryonis formations, these can be destroyed with the Cryonis Rune.

In Hyrule Warriors: Age of Calamity, Cryonis is used as a combat ability used by all Warriors. Located on the R Button wheel along with its sibling Runes and tied to the A Button while holding R, Cryonis can be used in a variety of ways, primarily combat support.

Once prompted, Cryonis can be used to put a charging attack on ice, chilling out the target by having them plow right into the ice, breaking the Cryonis ice pillar in the process, as well as leaving their now vulnerable Weak Point Gauge out in the cold.

Once Cryonis is used, it puts the entire R Button wheel on a cooldown for every playable Warrior that is on the field, so the cooldown cannot be circumvented by switching characters. Completing the "Keep a Cool Head" Quest and the postgame-exclusive Quest "Personal Distractions" upgrades Cryonis into Cryonis+, which evaporates the cool down period after using Cryonis.

As Zelda's first weapon class is Sheikah Slates, Cryonis is incorporated into her moveset. As it still counts as Cryonis without using the actual Cryonis prompt by using the R Button, Zelda's Strong I Combo strings can be used in place of a Cryonis counter.

All of the Warriors in Hyrule Warriors: Age of Calamity have their unique spin on using the Cryonis Rune power:

The word "Cryonis" comes from the Greek cryo or cryos (κρύο) which means "icy cold."[2]

Cryonis is also a contraction of the word "cryokinesis", which relates to the ability to create and manipulate ice.

Runes in The Legend of Zelda series
Community content is available under GNU Free Documentation License unless otherwise noted.
Advertisement