Zelda Wiki
Register
Don't have an account?
Sign In
Advertisement
in: Enemies, Common Enemies and Traps, Birds,
and 14 more

It needs to be updated to be accurate with information available at the present time. 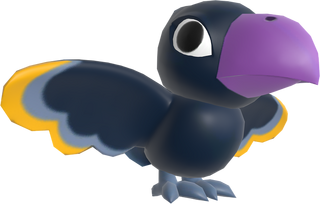 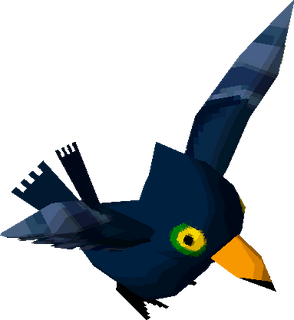 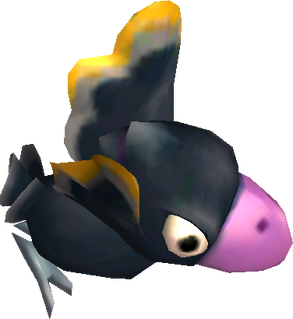 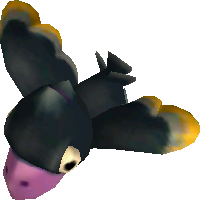 Sword
Crows are recurring Enemies in The Legend of Zelda series.[1] They are small, dark birds similar to their real-life counterparts, but are dangerous and aggressive, lying in wait to swoop down on passing travelers. They are also known for stealing shiny items such as Keys and Rupees. They are closely related to Takkuri and Dacto. They first appeared in A Link to the Past.

In most games the behavior of a Crow is the same; upon entering the territory of a Crow, the bird will swoop down at high speed in an attempt to ward Link off. Though these intimidating, a couple of swipes of Link's blade is usually enough to destroy them; the difficulty is hitting them. If Link fails to defeat them, they will usually give up their assault, but they may return for a second swoop, hounding Link for a short while.

In Link's Awakening, one Crow found in the grounds of Kanalet Castle will not attack Link unless provoked; this is because it has stolen one of Prince Richard's Golden Leaves. Link must strike the Tree it is hiding in with a rock and defeat the bird to retrieve the Leaf.

Crows appear in the Western Wood in The Minish Cap, perching on Trees. They will swoop down and attempt to strike Link. Takkuri appear as a red variant of Crows that can steal Rupees.

Crows will swoop down and attack Link in an attempt to steal Rupees from him in Phantom Hourglass.

Crows will swoop down and attack Link to steal his Rupees in Spirit Tracks.

Crows reappear in A Link Between Worlds, where they act the same as in ALttP. They also appear in the Octoball Derby minigame where they appear after 3 consecutive hits and award 20 points when hit.

A Crow, named Crowley, has a small role in the Oracle of Seasons manga, ordered by a Keese to stop Link before he can get the Rod of Seasons. Crowley drops a seed containing Manhandla and flies off, cawing all the way.

In Battle Quest in Nintendo Land, Crows appear simply known as Birds in the North American version of the game and as Cawsie in the PAL translation. Their appearance is significantly different from the main Zelda series, instead appearing as white, fat birds with heart-shaped wings. They look like a bag tied with a ribbon. Also unlike other games they are not aggressive, and instead of attacking the player they will fly away when they get near, although usually they can be spotted roosting in various locations far out of reach. They can be struck down with arrows and will always leave behind a heart.