This article is about the moveset in the Hyrule Warriors series. For the weapon from Link's Crossbow Training, see Crossbow.

"Two crossbows normally used to protect Cuccos from Wolfos. Use the Strong Attack to fire continuously, or hold down Y after a Combo Attack to fire bomb arrows!"
— In-game Description

Linkle wields dual crossbows in combat which has a Fire Elemental Attribute. When her Crossbows are not in use, they can be attached to the holsters on her thighhigh boots.

The two Crossbows originally were used to protect Cuccos from Wolfos and using its Strong Attack allows them to be fired continuously. Holding down the Strong Attack button after a Combo allows Linkle to fire Bomb Arrows. However it should be noted that her rapid fire Strong Attack will cause her Crossbow Gauge (located under her SP gauge) to deplete. The Crossbow gauge can be refilled by attack enemies with regular and combo attacks. Certain combos allows her to fire either two or several Bomb Arrows. Using her Strong Attack when the Crossbow Gauge is empty will cause Linkle to perform a taunt during which she will either lower or raise her hood, however do so leaves her wide open to attack.

In addition to firing arrows, Linkle can perform a kick-based uppercut, heel drop (after an aerial crossbow volley), a fiery flying kick, or a flaming kick-based Spin Attack.

During her Focus Spirit Attack, Linkle fires a Giant Bomb Arrow which she detonates with a fiery flying kick. At the end of Focus Spirit, she will preform a more powerful version of her flaming kick-based Spin Attack.

Linkle's Level 2 weapon, the Hylian Crossbows are based on the Crossbow from Link's Crossbow Training. 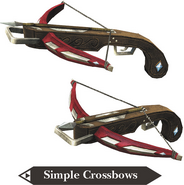 Promotional Render of the Simple Crossbows from Hyrule Warriors Legends 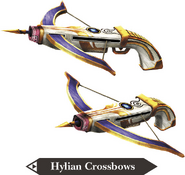 Promotional Render of the Hylian Crossbows from Hyrule Warriors Legends 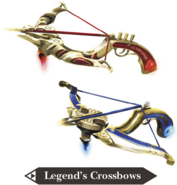 Promotional Render of the Legend's Crossbows from Hyrule Warriors Legends

Linkle's Crossbows are based on the Crossbow from Link's Crossbow Training. During the development of Hyrule Warriors, Linkle is shown wielding a single Crossbow in her concept artwork.

Retrieved from "https://zelda.fandom.com/wiki/Crossbows?oldid=542367"
Community content is available under CC-BY-SA unless otherwise noted.