This article is about the Item in The Legend of Zelda series. For the game, see Link's Crossbow Training. 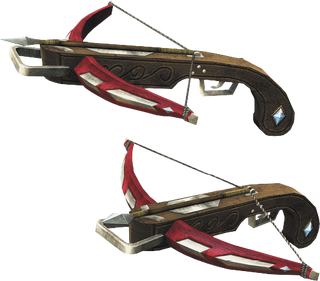 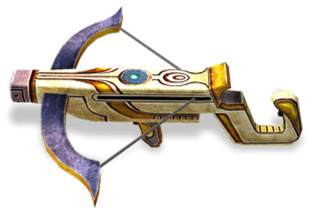 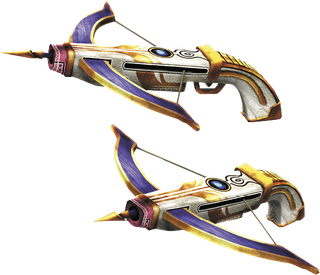 Shooting Arrows from a distance

Bow
Crossbows are recurring Items in The Legend of Zelda series.[1][name reference needed]

In The Legend of Zelda TV series, Crossbows appear in three episodes, wielded by a different character each time. They fire beam-like Arrows instead of the usual Arrows. In "The White Knight", a defeated Tinsuit leaves behind a Crossbow, which Link gives to Princess Zelda so that she may help him fight off the rest of the Tinsuits. Although the princess is successful in defeating several of the monsters, the Crossbow runs out of ammo and leaves Link helpless. However, soon after, Prince Facade arrives and uses his Crossbow to defeat the remaining foes.

Princess Zelda is seen once again wielding a Crossbow in "Fairies in the Spring," in which she uses it to defeat an eel that was electrocuting Link. In "The Moblins are Revolting," two Moblins use Crossbows as they try to defeat Link; however, they eventually end up defeating themselves and their Goriya companions with it.

In the A Link to the Past comic by Shotaro Ishinomori, Roam uses a Crossbow as one of his weapons, although he is never seen using it in battle. Roam's Crossbow is first seen in chapter 8, where he shows it off to Link and claims he is looking for the Silver Arrow to defeat Ganon with it. After Roam dies saving Princess Zelda from a specter of Agahnim in Ganon's Tower, Zelda picks up Roam's Crossbow and aims it at Ganon. She then begins to ask for the aid of the maidens and fires an ordinary Arrow from the Crossbow. As it approaches Ganon, the power of the maidens, Zelda, Link, and Roam, turn the Arrow into the Silver Arrow,[2] destroying the King of Thieves.

In Link's Crossbow Training, the Crossbow is a long-range weapon capable of taking out targets from a distance and functions much like a regular Bow. However, it has unlimited Arrows,[3] and it can be shot much more rapidly than the Bow. Throughout stages, temporary upgrades can be obtained. The Exploding Crossbow fires Exploding Arrows.[4] Exploding Arrows do more damage, but limit the succession of shots by requiring a charge up time between them.[5] The Automatic Crossbow allows firing many shots in rapid succession.[6] This enhancement is obtained by defeating Enemies flashing green. Once all Arrows are exhausted, the Automatic Crossbow reverts back to normal.[7] 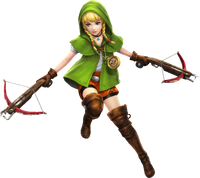 In Hyrule Warriors, the Crossbows are a class of weapon used by Linkle. It is associated with Fire. Linkle wields a pair of dual Crossbows, which glow green when firing shots in rapid succession, and glow red when firing Bomb Arrows.

Linkle shoots once with her two Crossbows pointing forward, then once with one pointing forward and the other back, and then turning around to fire both of them forward again. She then performs two spins while firing both Crossbows rapidly, and ending the attack in a huge, fiery explosion. This attack hits enemies in a mid range around Linkle.

Bows in The Legend of Zelda series
Community content is available under GNU Free Documentation License unless otherwise noted.
Advertisement