It needs to be updated with information from A Link Between Worlds.

A Critical Point is a fan term used to refer to the short amount of time in which Link has the opportunity to inflict damage on a boss, often with his Sword.[name reference needed] Critical Points go unnamed in The Minish Cap. It is not to be confused with a weak spot, which is the specific point on a boss that must be attacked during this period. Usually, after the required steps have been completed, the boss will grow tired, faint, or expose its weak spot, giving Link a much-needed chance to strike. In Twilight Princess, Critical Points are denoted by a change of music, shifting from the regular boss theme to a more triumphant-sounding one.

It has been a facet of every 3D Zelda game to date, as well as The Minish Cap, to incorporate around three Critical Points in a boss battle before the boss is defeated. However, if Link fails to deal enough damage within the time that he has, then more than three will often be required. Certain bosses may initiate a new phase of the battle or change their form rather than being defeated, often requiring Link to go through another three Critical Points in order to fully defeat them.

The following is a list of all Critical Points that appear in The Legend of Zelda series, as well as how Link can initiate them. 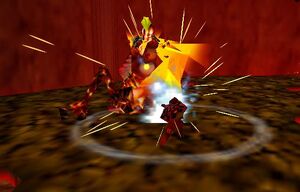 Notes: Twinrova does not have a critical point during the first phase of the fight because only the Mirror Shield can be used to deflect oncoming blasts of fire and ice back at the witches. Therefore, they cannot be struck by the Sword. Also, Phantom Ganon has no critical point as long as he is riding his horse.

Zora Link targets Gyorg for an assault during its Critical Point

* These bosses can be hurt outside their critical point.

Notes: Twinmold does not have a critical point, as its weak spot is constantly exposed. Also. all of the bosses' critical points can be reached by shooting the sword beams out of Fierce Deity Link's sword. This method is much quicker and proves to be easier, too.

In Majora's Mask 3D, all bosses were given a Critical Point in the form of an eyeball that can be exposed, resembling the eyes of Majora's Mask. Some bosses have their Critical Point exposed by attacking them in the same manner as in the original game, while others require new, more complex strategies. 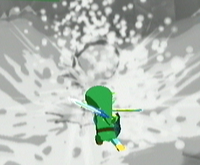 Note: Gohma does not have a critical point during the first phase of her fight as Link first has to disarm her armor, and until then, no attack (not even the rock from the ceiling) will deplete her life meter.

Note: Big Octorok does not have a critical point, because in order to damage it, Link must reflect its rocks and burn its tail with the Lantern. 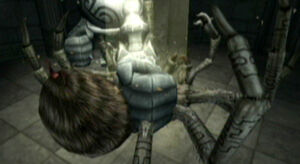 Armogohma is slammed during its Critical Point

Notes: Blizzeta in the Snowpeak Ruins does not have a Critical Point because Link can only use the Ball and Chain to hurt her. Puppet Zelda does not have one either, as the only way to damage her is for her own energy ball to backfire as a product of Dead Man's Volley.

Note: The Cubus Sisters have no Critical Point, as they are in a high spot and thus Link can only hurt them by bouncing back their attacks.

* These bosses can be hurt outside their critical point.

Notes: Ghirahim has no Critical Point in his second battle, and in the first he can be hit outside of the completely optional one. Likewise, Moldarach's Critical Point is optional during the first phase, and there is none in the second. Levias has no critical point whatsoever.

Moldorm and its Lady's Pet version both lack a Critical Point, as the Links must simply strike their tails whenever they are exposed. Blizzagia also lacks one, as after its mask is destroyed, the Links must strike its head at any opportunity.

In Hyrule Warriors, Weak Point Gauges appear as critical points over Enemies after performing certain attacks that leave them vulnerable.[1]