Zelda Wiki
Register
Don't have an account?
Sign In
Advertisement
in: Objects, Swords, Items, Items in The Legend of Zelda TV Series 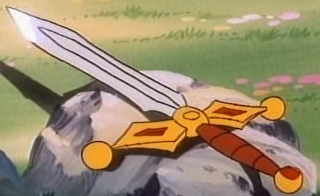 The Crissword as seen in "The Missing Link"

Zap monsters back to the Evil Jar

Magical Sword
The Crissword[1] serves as Link's Sword in The Legend of Zelda TV series. It resembles a long dagger more than a sword, and Link is almost never shown to slash with it, using it only to parry and attacking using its Zaps. Any monster that receives a sword beam from the Crissword is sent to Ganon's Evil Jar, including Ganon himself.[2] However, Link cannot use its sword beams to hurt anyone who is not a monster, as shown in "Sing for the Unicorn" when the young hero is unable to damage Sing with it.[3] In the episode "Stinging a Stinger", the sword is given the name "Crissword."[1]

The zaps emitted from the Crissword are powerful enough to knock back the person holding the sword. As such, the sword must be held with two hands by beginners until they are able to master it completely.[4]

In the "Stinging a Stinger" episode, Sleezenose tricks Link into trading his Crissword for a Sword, and although the young hero at first hesitates, he is convinced when Sleezenose tells him that anyone who wields that sword is made irresistible to women, especially princesses.[5] When Link hears Princess Zelda scream for help, Link trades it in and confidently faces the attacking Patras with his new sword but immediately breaks, realizing that he has been tricked.[6] Later on, Sleezenose tries to sell the Crissword to Ganon for 1000 Rubies,[7] but the evil wizard disagrees and simply takes it from Sleezenose's hands with no reward.[8] Link eventually retrieves his sword when Zelda and Sleezenose himself distract Ganon by attacking him with beehives.

The sword is also wielded by Zelda in several occassions, such as in the "Doppelganger" episode in which Zelda grabs Link's sword to zap her own clone.[9] In "The Missing Link", Zelda uses Link's sword to defeat several Stalfos in the Underworld since Link has been turned into a ghost. Although at first she is unable to wield it correctly, Link offers her some tips which ultimately help her destroy all of the skeleton foes.[10]