This article is about the small island on the Great Sea in The Wind Waker. For the similarly named landmass in Oracle of Ages, see Crescent Island. 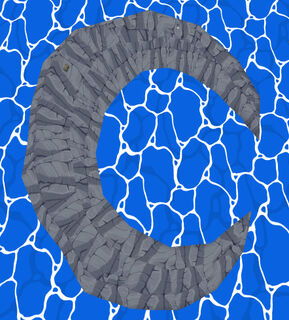 Crescent Moon Island is one of the islands of the Great Sea in The Wind Waker.[1]

The island is named for its likeness to the moon phase. Located northeast of Windfall Island, it is one of the islands where the Ghost Ship appears frequently (in this case, on nights when the moon is full). A Treasure Chart can be found on top of the crescent, as well as a Submarine in the vicing waters.

This is the only island in the entire game with two Blue ChuChus, which give it extra value. Giant jars atop barrels float nearby, although they sink when Link is too close to them (it is advised he break the jars from a distance and retract the freed items with the Boomerang). After retrieving and opening one of the Treasure Charts acquired in Dragon Roost Cavern, the location of a Piece of Heart in the waters surrounding the island is revealed.

Crescent Moon Island is in cell 5A of the Great Sea viewed as a grid.