Zelda Wiki
Register
Don't have an account?
Sign In
Advertisement
in: Locations in Oracle of Ages, Crescent Island, Islands,
and 2 more
English

Not to be confused with Crescent Moon Island. 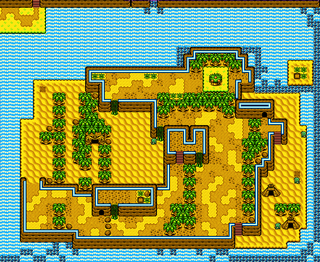 Crescent Island in the Present

Labrynna
Moonlit Grotto
Crescent Island is an eponymous landmass located on the southern seas in southeastern Labrynna, in Oracle of Ages.[1]

Crescent Island is inhabited uniquely by the reptilian Tokay,[2] a friendly and playful folk, who seem to not have much contact, if any at all, with the outside world, as they do not realize what Link is at first upon his shipwreck arrival.[3] This is likely due to the fact that the island on which they live is almost entirely cut off from the outside world.

In the past age, the sea floods the less elevated mid-western section of the island, forming a small bay that gives the island its crescent-like shape from which it is named. Near the center of the island, on a small peninsula jutting out into the bay, stands a statue of a Tokay, which the island natives consider to be their "guardian".[4] In the present, however, the sea will have receded, drying out the bay and uncovering more of the island, causing tropical vegetation to sprout in the area. Hidden by the growth, the ancient Tokay statue still stands. In reality, the statue's open mouth is the entrance to the Moonlit Grotto, the third dungeon of the game. In the past, the same opening becomes the entrance to a passageway leading to the Ancient Tomb, the final dungeon of the game.

Crescent Island is littered with caves and grottoes, where many of the Tokay can be found. The Tokay community is established mostly on the eastern end of the island in the form of a small village of huts. In the past, the Wild Tokay mini-game can be found in the area. A trading post named Tokay Traders can be found on an islet northeast of the island. In the present, the Wild Tokay mini-game is replaced by the Wild Tokay Museum, which honors the games the Tokay played long ago.[5] Inside one of the huts Link will find a particular Tokay who plays a role in the Trading Quest. This Tokay, who is actually the chef of the village, will exchange the Stink Bag for a piece of his own Tasty Meat.

Towards the northern end of the island is a small clearing of fertile soil, dubbed the "tree nursery" by the Tokay. It is said that, long ago, a Scent Tree once stood in the clearing.[6] If a Scent Seedling is planted in the nursery in the past age, it will become a full-fledged Scent Tree in the present.[7]

In the present age, a winding underwater maze exists beneath the island.[8] A small grotto can be found and the end of the maze. Inside the grotto is a Treasure Chest containing a Piece of Heart.

Crescent Strait is a small channel of water north of the island, placed between it and the Sea of No Return. The strait separates Crescent Island from the South Shore, the southern border of Labrynna's mainland. With the Mermaid Suit, Link is able to swim below the surface, where the entrance to the maze beneath Crescent Island is located. Due to the recession of the sea some time between the past and present ages, the strait is smaller in the present than it is in the past.

Getting to the Island

To access the isolated island, Link requires a Raft. The raft is made by Rafton in past-age Labrynna, once Link has given him the Cheval Rope,[9] a special rope that does not decay in water.[10] Along with the Zora's Flippers, the rope is obtained from Cheval's Tomb in the Yoll Graveyard. To access the tomb, the young hero requires the aid of Moosh, one of the animal companions he meets on his adventure. To obtain the raft, he will also need to get the Island Chart from Tingle.[11][12] To reach Tingle in the Forest of Time Link will require the help of Ricky, another animal companion.

With the raft, Link sails towards Crescent Island. However, partway during the journey, a storm blows over the sea, scuttling the raft. The hero awakens on the shores of Crescent Island, surrounded by a group of curious Tokay. Seeing him stir, the Tokay scatter, taking with them all Link's items. Link explores the island, searching for each Tokay that stole one of his items, using each new item to access a new area of the island. Two of Link's items, the Power Bracelet and the Roc's Feather, can be found at the Tokay Traders trading post, which he will have to buy back with Mystical Seeds. If Link does not have the seeds to make the trade, he can temporarily exchange his Shovel for one of the items.

In order to buy back all his items, Link will need to acquire Scent Seeds. To do so, he must win the Scent Seedling, a prize obtained from the Wild Tokay mini-game, then planting it in the "tree nursery". Many years later, in the present age, the tree will seedling will grow into a Scent Tree, allowing Link to gather his first Scent Seeds and use them to buy back the rest of his items. With all his items, Link is able to enter the Moonlit Grotto dungeon and obtain the Echoing Howl, the third Essence of Time.

After completing the dungeon, Link meets his third animal companion, Dimitri, washed up on the shores of the island. Two Tokay nearby, mistaking Dimitri for a fish, plan to cook him and eat him.[13] Link comes to Dimitri's rescue by trading the Tokay Ember Seeds in exchange for their "fish".[14] Thankful for the rescue, Dimitri allows Link to ride on his back. Thanks to Dimitri's swimming ability, Link is able to leave the island. The young hero can return to the island any time he chooses if he receives Dimitri's Flute, or after obtaining the Mermaid Suit.

Much later on in the game, Link returns to the island to obtain the final Essence of Time. Inserting the Tokay Eyeball into the empty eye socket of the Tokay statue reveals the entrance to a passageway leading to the Sea of No Return and the Ancient Tomb therein.