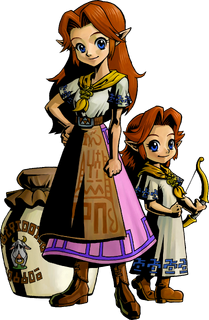 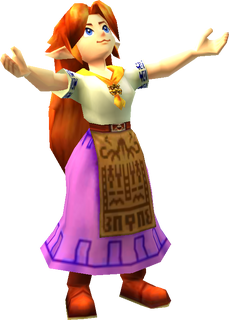 Cremia is a character in Majora's Mask.[3]

Cremia is the elder sister of Romani. She manages Romani Ranch in place of her deceased father. She is a close friend of the Stock Pot Inn keeper, Anju,[4] and it is revealed by Romani that she has a crush on Kafei, Anju's fiancée.[5][6] She treats Romani like a child, a fact that annoys her younger sister. Since the death of her father, everything seems to have been going wrong for Cremia around the Ranch, likely due to the Gorman Brothers.[2] Cremia is known to be a kindhearted and caring sister, and is almost constantly working, trying to provide for herself and Romani. Despite this, she does not believe Romani about the Ghosts.[7]

If Link helped Romani save the Cows from the Ghosts, Cremia will invite him to accompany her on the ride to deliver the Milk to the Milk Bar. As the Gorman Brothers have blocked Milk Road, they ride down the Gorman Track instead. As the Brothers intend to steal the Milk, Link must prevent them from doing so. After they deliver the Milk, Cremia will reward Link with Romani's Mask.[8] If the quest is completed again after obtaining the Mask, Cremia gives Link either a Gold Rupee or an affectionate hug.[9] The decision amounts to a random choice with a 50/50 probability for either outcome.[10]

Even though some of the citizens of Clock Town take refuge at Romani Ranch on the night of the Final Day, Cremia reveals that she knows even they are not safe from the Moon in the Ranch, and sadly accepts the fate that awaits all of them.[11] Knowing that they probably will not survive, Cremia grants her younger sister, who does not know of the fate that will befall them, the wish to drink Chateau Romani for the first time, something she had been denying Romani since she was not an adult yet.[12] Furthermore, she acknowledges Romani as an adult and even promises to make her a Mask to officially signify her younger sister's status as a grown-up.[13] Before heading back to their home, Cremia asks her sister to sleep with her in her Bed, to which Romani agrees.[14]

During the ending sequence, Cremia can be seen cheering on her younger sister, who is practicing her Hero's Bow. Cremia is later seen witnessing Anju's wedding with Kafei.