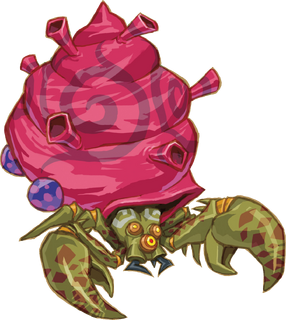 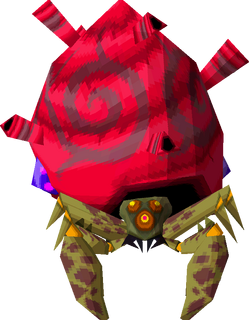 Crayk is a boss in Phantom Hourglass.[1] It is a large, hermit crab-like that inhabits the Temple of Courage.[1]

When the battle starts, it turns invisible, but on the top screen, the room is shown from Crayk's viewpoint (presumably because of the second half of the Spirit of Courage it is guarding). When the top screen shows it charging at Link, the young hero must fire off an Arrow, (on the top screen, the player can see Link aiming at themselves) and it will withdraw into its shell. If Link fails to fire an arrow at it, Crayk will grab him, and Link must move the stylus back and forth in order to break free. When in its shell, Link can throw Bombs at it. Link can also use his Sword or Arrows to break the purple orbs surrounding its shell. Slashing it is easier, but more risky. Once every purple orb has been destroyed, Crayk's shell will fall off, leaving its tail vulnerable. The young hero must then fire arrows at Crayk to stun it and then slice its tail.

Throughout the battle, Crayklings roam the battle area.

Once Crayk is defeated, it will turn into Sand of Hours and Link will get a Heart Container and the second half of Ciela.

After Cyclok has been defeated by Link, Crayk is awakened from deep within the sea to crush the hero and his companions.[2] Crayk captures the girl Link had rescued from Cyclok. It tells the hero to come to Molida Island if he wants her back.[3] When Link does so, he finds Crayk making a nest in the sand that the girl is trapped in.[4][5] Link attacks the monster and is caught in its claws. The girl gives Linebeck a bow, which the captain in turn gives to Link.[6] Link shoots Crayk in one of its eyes with the bow and stabs it with his sword. Crayk disintegrates into the Sand of Hours.[7] The girl Crayk captured turns out to be Ciela's lost memories.[8] The two are reunited, transforming into the Spirit of Courage.[9]

Crayk's name is a possible reference to the crayfish, a crustacean resembling a lobster.