Zelda Wiki
Register
Don't have an account?
Sign In
Advertisement
in: Coves, Craters, Locations, Locations in The Faces of Evil 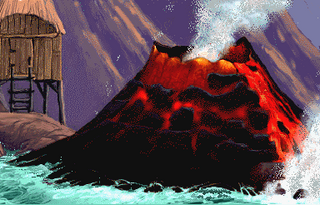 Crater Cove is a location in The Faces of Evil.[1] Along with Goronu and Nortinka, it is one of the game's starting areas.

Crater Cove is a volcanic shore on the eastern coast of Koridai, close to the Face of Goronu. It is home to a small fishing settlement with two huts, and has a small active volcano that continuously gushes lava. The area's volcanic activity makes the Cove a hostile and dangerous place. Nonetheless, it is a suitable fishing spot as fishing lines string along the Cove's walls. The sole inhabitants, Anutu and the Fish Lady, work in fishing and butchering fish, respectively. A tunnel also leads into a scorching cave with boiling magma inside, but has since been boarded up. A large, draconian skull also appears beside the entrance.

Following Ganon's siege of the island, Dairas and large Gohmas have since overrun the Cove. Falling Rocks released from the volcano also pose as a threat. A raised hut belonging to the Fish Lady stands close to the volcano, but is at first locked. At the far end of the Cove is Anutu's house, who claims to have caught a giant crab. Link corrects him that it is a Gohma, and is rewarded the Power Sword for his knowledge. A Key also sits beneath Anutu's house, which unlocks the door to the Fish Lady's hut. Inside, the woman explains that she was the one responsible for boarding up the cave's entrance, as Fire Dairas emerged from its vent. She gives Link a hint that she had hid the Key inside the skull.

Fire Dairas infest the tunnel in large numbers. Their sole weakness is to Snowballs, and they drop Firestones as they are defeated. In the center of the cave is a pool of magma, which Link must jump over to safely cross. At the very end of the tunnel is a Triforce Map, which returns Link to the world map screen. After the stage is completed, Spearfish Falls is unlocked.