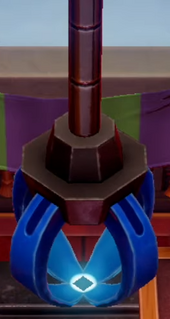 Picking up Items in the Trendy Game
The Crane is an object in Link's Awakening.[1]

The Crane only appears in the Trendy Game of Mabe Village. Once the mini-game's fee is paid, it can be controlled remotely by using the panel. Pressing the B Button will make it go right until released; the A Button will make it go down until released. The Crane can not reverse its movement before the round is finished. Once both buttons have been released, it will proceed to slowly drop down and open its claws just before closing them back again and bringing any grabbed item back to another conveyor belt, which will eventually be accessible to grab.