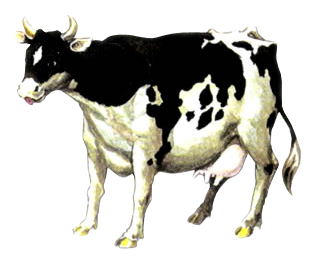 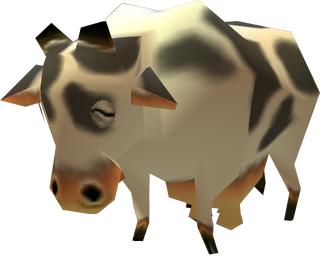 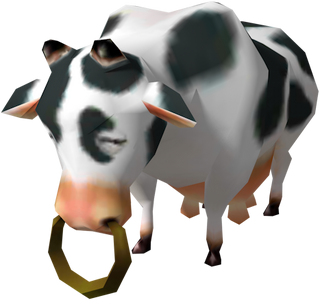 Cows are a recurring species in The Legend of Zelda series.[1][2] They are Hyrule's primary source of Milk, and are kept in the land's various farms. A few Cows seem to strangely possess the ability to talk, such as speaking to Link.

In Ocarina of Time, Cows can be found all over Hyrule. Many can be found in various holes and caverns, but a few are also kept at Lon Lon Ranch, and tended to by Talon and Malon. In this game, a free Bottle of Milk can be obtained by playing "Epona's Song" in front of a Cow. They will appreciate the song, and give Link milk for it.[3] In the Master Quest version, several Cows can be found Inside Jabu-Jabu's Belly. These Cows serve a rather odd function of being a switch, unlocking doors and dropping Treasure Chests or items when hit by the Slingshot.

Link can win his own Cow by beating the Obstacle Course record at Lon Lon Ranch. The Cow will be delivered to his house and can be found in his room.

Cows are also featured in Majora's Mask. They are not as commonly found around Termina as they are in Hyrule, but there are several special "Romani-Bred" Cows at Romani Ranch, from which one can milk Chateau Romani.[4] As in Ocarina of Time, "Epona's Song" can be played to a Cow, and they will produce regular Milk to give to Link for free.[5] The Ghosts come on the first day to abduct the Cows from the Ranch, and Link is hired by Romani to fend them off.[6] If Link fails, the Cows are taken, and the girl with them.

Cow figurines are also found on the counters of many shops in Clock Town, and they are the subject of one of Keaton's questions.[7]

Cows also appear in The Minish Cap, although they appear slightly differently than their past incarnations. The majority of these Cows appear in Lon Lon Ranch under the care of Talon and Malon, where they produce Lon Lon Milk that Malon brings to Hyrule Town, via Epona and cart, to be sold. Cows also serve as occasional road blocks and will only move once Link has progressed further on his quest.

Elsie, one of the Cows at Lon Lon Ranch, can Fuse Kinstones with Link if he is Minish-sized. A Cow also appears in the "At Lon Lon Ranch" Figurine.

Domestic variants of Water Buffalo, known as Hateno Cows, appear in Breath of the Wild. They can be found grazing in Hateno Pasture.

In the Oracle of Ages manga by Akira Himekawa, Link wins 200 Rupees and a Cow after winning an arena match.[8] Impa angrily raises the Cow over her head after scolding Link for entering the match.[9] Her mood changes when Link reveals to have won the Cow for his grandmother, who needs another one.[10]

The Cow makes a final appearance when Link returns to his grandparents' farm.

Cows in The Legend of Zelda series
Community content is available under GNU Free Documentation License unless otherwise noted.
Advertisement