Cottla is a character from The Legend of Zelda: Breath of the Wild. She is a Sheikah and can be found at Kakariko Village in the West Necluda region of Hyrule. She is the sister of Koko and the daughter of Dorian. Unlike her sister, Cottla is more childish and enjoys playing games as she can become easily bored, however she is less fearful than her sister.

According to Dorian, she is excited by his ghost stories of a woman sobbing in the forest. It was an attempt on his part to scare his daughters so they would stay away from the forest where monsters had started appearing (until Link restores Cotera's Great Fairy Fountain), but this is only effective with Koko.

She is implied to be younger than Koko despite both seeming to be around the same age and as a result fails to realize their mother is deceased after having been murdered by the Yiga Clan due to their father being an former member who left the clan behind after falling in love with their mother before they were born. The Yiga Clan killed their mother and threatened their lives to blackmail Dorian into becoming an unwilling mole for the Yiga Clan though Dorian recently became strong enough to protect his daughters and stopped spying for the Yiga Clan as his wife's death and threats to his daughters' lives had turned him completely against the Yiga Clan. Dorian tries to keep them from learning the truth though Koko figured out their mother's fate and realizes their mother is buried in the small graveyard north of the village and visits it in the mornings to secretly mourn while trying to remain strong for Cottla and Dorian's sake. However Koko decides to keep said knowledge to herself as Cottla fails to realize it and in the mornings innocently plays Hide-and-seek with her mother due to believing her mother is simply hiding. Koko helps care for Cottla in place of their mother as Dorian is often busy guarding Impa. Koko even cooks meals for Cottla as long as it isn't raining as she uses the outdoor Cooking Pot of High Spirits Produce which is exposed to the elements. When it rains she and Koko take shelter in the Shuteye Inn. She goes to bed at night falling asleep while Koko tries to stay up to greet their father when he comes home.

During the side quest "Playtime with Cottla", Link can play tag or Hide-and-Seek with Cottla. If Link wins, Cottla rewards him with Rock Salt. After completing the side quest, Link can play with Cottla again to earn Amber or Rock Salt. Link cannot play with her in the morning when she attempts to "play" hide-and-seek with her mother as she refuses. Additionally Link cannot play with her when she and Koko listen to their father's stories. She will stop playing around dinnertime and warns Link of this before playing. However her mini-games can be played for free. 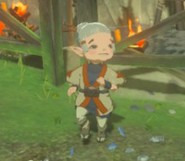 Add a photo to this gallery
Retrieved from "https://zelda.fandom.com/wiki/Cottla?oldid=544797"
Community content is available under CC-BY-SA unless otherwise noted.