"Say, you seem to like people... But I bet even a good pup like you gets the evil eye from people just 'cause you're a wolf. But me, I'm not worried about you, little guy. My older sister is much scarier than you."
— Coro

) is a character from The Legend of Zelda: Twilight Princess. He lives in a small hut in Faron Woods, where he sells Lantern Oil. 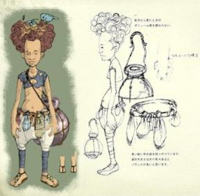 Coro is the younger brother of Iza and the older brother of Hena. He is one of the only people who does not fear Wolf Link, claiming that his older sister is scarier (oddly enough Iza herself also shows no fear towards Wolf Link, even threating to turn the Wolf into a fur coat if he speaks to her in Wolf form). In the Fishing Hole owned by Hena, there is a photograph hanging on the wall of him with an Ordon Catfish. Though he is the only member of Hena's family that is relatively unskilled at fishing, he managed to make that catch using a type of Sinking Lure. He, like his sister Iza, has a large afro, which birds have amusingly built a nest in. He comes across as lazy, but it is possible that he could just be a very mellow individual, which would explain why animals seem to be so fond of him. He is also an unskilled cook, and consumption of Coro's soup may actually harm the drinker.

It is implied that his use of a illegal Sinking Lure in the past, lead to problems in his relationship to his younger sister, Hena which apparently lead to Coro leaving Zoro River to live in Faron Woods away from his sisters and refuses to help his younger sister Hena out at the Fishing Hole (possibly due to their strained relationship), causing her to come to view her brother as both lazy and useless person (and seems unaware that he has set up his own business in Faron Woods selling Lantern Oil to travelers).

Coro gives Link a free Lantern when they first meet. When Faron Province is consumed by twilight, he can be found in his house, hiding from Shadow Insects. Later, after the twilight has been lifted, he gives Link a Small Key to open the gate leading to the Forest Temple (at this time, he also offers to sell Link a Bottle of Lantern Oil for 100 Rupees). Coro makes a living by selling Lantern Oil to passersby, revealing the reason why he gave Link a free Lantern in the first place. It should also be noted that Coro has a pet bird named Trill, who operates a shop further into the forest, near the Forest Temple, where Link can purchase Lantern Oil and Red Potion.

He and his siblings are seen sitting on the Fishing Hole's dock looking at a waterfall together during the ending sequence.

Retrieved from "https://zelda.fandom.com/wiki/Coro?oldid=495676"
Community content is available under CC-BY-SA unless otherwise noted.