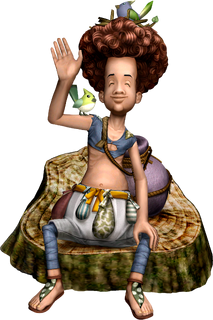 Coro is a character in Twilight Princess.[2]

Coro is a man with a large afro, which birds seem to have used as a nest. He is a horrible cook, and lives near the Faron Spring in the southern portion of Faron Woods, right outside of the Ordona Province. From there he sells Lantern Oil refills, either for empty Bottles or the Lantern itself. Early in the game, he kindly gives Link a free Lantern as part of a business tactic he is working on.[3] He has an older sister named Iza and a younger sister called Hena, who also run their own businesses.

Coro sits in front of a cauldron filled with a Nasty Soup that cannot be scooped until heated with the Lantern. Link's reaction to the soup varies and it can sometimes even take Hearts rather than replenish them.[4] The young businessman also has a pet Bird named Trill who watches over another shop in the northern part of Faron Woods. Trill comments on how his master never shows him any appreciation for watching the shop every day, and presumes that Coro probably did not get much appreciation either growing up.[1] If Link steals from Trill's shop, Coro gets mad at Trill for letting that happen.[5]

According to Hena, Coro is the only one in the family who is lousy at fishing, having to resort to using a Sinking Lure in order to catch a fish.[6] Moreover, his sister considers Coro to be lazy and worthless since she sometimes asks him to help out at the Fishing Hole, but he never drops by.[7]

Coro is one of the few characters who is not afraid of Link in his wolf form, even saying that his older sister is scarier than the wolf.[8]

During the end credits, Iza, Coro and Hena can be seen together relaxing at the Fishing Hole.