Zelda Wiki
Register
Don't have an account?
Sign In
Advertisement
in: Objects, Ancient Technology, Objects in Breath of the Wild 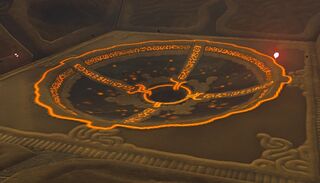 Usually found within Ancient Shrines, Concave Slots are large, glowing, bowl-shaped divots in the floor with a small or large slot at the center, serving as a receptacle for an Ancient Orb, one of which is usually somewhere nearby. They are covered in Sheikah iconography, and act as Switches to activate various mechanisms, such as doors in Shrines. Because of the Concave Slot's bowl shape, an Orb can easily roll down into it when tossed from a distance.

Concave Slots are sometimes found in the Overworld in two different variants: a Sheikah pedestal with a slot for an Orb – typically used to summon a Shrine – and a plain, stone bowl shape, used to receive a spherical object that is visually different but functionally identical to an Ancient Orb.