Not to be confused with Zelda.com, also sometimes known as "Zelda Universe" 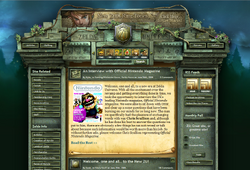 Zelda Universe was started in February of 2001 by Lars-Christian Simonsen, aka AnakiN-. It started out as a small, personal website with sporadic information on Ocarina of Time and Majora's Mask. Within a year, it was expanded to include more in-depth coverage of the two games, as well as the older games. Popularity increased almost exponentially with the addition of new content, and reached its peak around the release of The Wind Waker in 2003, when more than 15,000 people visited the site per day on average over a period of a couple of months. Since that it stabilized itself as the most popular Legend of Zelda fan site online.

Summer of 2005 was marked a time of change for the website, when Lars decided to pull out of the site due to personal reasons. Lee Dodd made an offer which was accepted, and became the new owner of the site. A year later he decided to cash in, and sold the site to Yousof ("spdude"). Yousof held the site throughout the year and up to mid-2007. These years were marked as a period of commercial growth, with both Lee and Yousof facing accusations that they didn't genuinely care for the community, only owning the site to reap advertising revenue while leaving the community to manage itself.

Late July marked the return of Jason Rappaport to the community, who had previously served as a webmaster under Lars and Lee. Soon after his return, Jason made an offer to Yousof to buy the site... an offer that after much discussion Yousof accepted. Even though the framework around the site has changed several times since 2005, the core values and day-to-day operations stayed the same, and Zelda fans and site veterans have stayed in charge of the maintenance of the site.

Zelda Universe is split up into teams who manage distinct parts of the site. These teams are:

Operations Team: This team oversees the site and other teams as a whole.

Design Team: In charge of the graphic design and branding of the site.

Development Team: In charge of coding and development work.

Publications Team: Oversees most of the site's written content. Sub-teams for Columns, Features, Guides and News.

Special Projects Team: Runs any unique events, such as a panel at a convention.

Since its early days, Zelda Universe was tended to by Webmasters. Over the years, the number of these fluctuated between two and six. As more of these webmasters were added, it became less and less clear to all involved what exactly was the role of the Webmasters and where their duties and responsibilities ended. In early 2014 in an effort to make clearer the roles of Webmasters as well as to increase internal transparency, Jason introduced a new leadership framework. Now instead of "Webmasters" each leader would be in charge of a team with the intention of bringing greater direction to the goals of each whilst clearing up where their powers ended. Some of these changes involved including the new role of Community Director as well as Zelda Wiki Director; these two brought new voices and concerns to the leadership.

At the top of the framework is Jason, the owner and Chief Executive Officer. Under him was Cody, the Operations Director, in charge of day to day operations as well as coordinating the other leaders. Under these two come the various other team leaders.

Since it cemented itself as the most popular site within the Zelda community, ZU has found itself the caretaker of a growing and diverse forum community. Due to its sheer size, it has had its fair share of cliques, trends, memes and internal disputes, and has continued as a community for over 15 years.