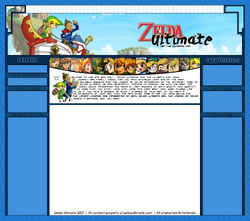 Zelda Ultimate was the result of a merger between Zelda Realms, Zelda Genesis, and Zelda's Rejects. The site was officially opened on March 15, 2007. It was owned and operated by Vincent, Travis, and Last Hylian. It was considered a sister site of Zelda Legacy as both the site staff and the forums shared many of the same members, but was run independently. The site ran until January of 2008, when the three owners could no longer see eye to eye and decided to shut it down.

Zelda Ultimate underwent many changes in its brief existence. A new site design was released every few months, and they were always coming up with new ideas to differentiate themselves from other sites. One such idea was their forum hosting service called ZUBB, where users could create their own personal forums through Zelda Ultimate. The site became pretty big for the time, receiving 10,000+ unique hits a month, and with a bustling forum community.

Shortly after Zelda Ultimate shut down, the three owners decided to try again and relaunch the site under the name of Travis' old site Zelda Genesis. This lasted for a good while, but ultimately, they remembered the reason they shut down Zelda Ultimate in the first place, and Zelda Genesis shut its doors a few months later.

At the time of Zelda Ultimate's closure, the staff members consisted of:

The site still exists for anecdotal reasons. If you visit the old URL, you will find a short blog post as well as a mock-up of what the site would look like today if it was still active.