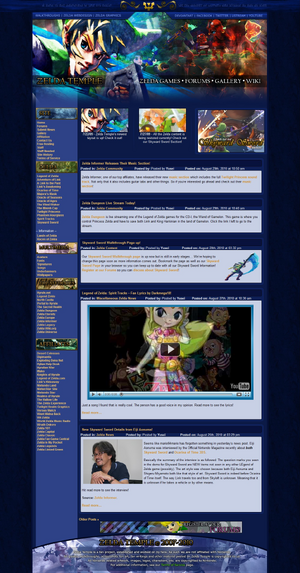 Defunct as of February 6, 2015
Zelda Temple was a site that began originally under the name of Zelda Divine. It was a small site just starting off, and over a course of two years, sought to make a guide for every game. The original Zelda Temple was owned by MagicKeaton under the url: zeldatemple.net, but was later given to someone for some time, and eventually was handed to Yusei. Eventually after hosting issues and problems, Zelda Temple switched to its own hosting and its own url zelda-temple.net.

Back around December of 2006, Yusei was a regular around the website Zelda Legacy, owned by Killswitch. Slowly she had gained inspiration, but had no idea where to start. Upon approaching Killswitch, she was able to get hosting and with the help of then Zelda Legacy administrator Swiftblade, she created Zelda Divine on January 9th, 2007. Zelda Divine was very popular in its days, but due to hosting issues, and constant disputes over who had "rights" to having Divine in their site's name, it vanished.

Someone saw great potential in Zelda Divine and decided to give Yusei a second chance. He gave Yusei the domain and hosting that he had for Zelda Temple and paid for it for a little while. The site had an alarming growth in activity from its days as Zelda Divine.

However, Zelda Temple's popularity began to fade, and the members sought solace in a merge with Forsaken Legend, run by Lord of the Twilight. The merge proved to be full of rising tensions, and the two webmasters eventually parted ways and went to their own sites again. Zelda Temple was rebirthed after that, and was briefly hosted by Zelda Oracles before moving to the current hosting and domain name.

During March of 2009, Zelda Temple was given the Golden Ocarina[1] a Golden Item Award given by Darth Citrus of Exploding Deku Nut to a small, young site that shows promise in the community. It should also be known that Zelda Temple almost got the same award the year previous, but had just been slightly beaten by Zelda Capital.

On April 16th, 2009, Zelda Temple was added as one of the Masterminds of Zelda Wiki and to this day assists anyway possible to help the Wiki. Yusei and Zelda Hunter both serve to help the wiki with grammar mistakes or adding onto pages in the wiki.

On May 1st, 2009, Yusei decided to hire a new webmaster to help her with Zelda Temple, as soon it would be her time when life comes and gets in the way. She hired Zelda Hunter, a member of the forum who has been with the forums since Eternal Hyrule, the merged forum name of Zelda Temple and Forsaken Legend, and has been ever loyal to the site, no matter the changes and harsh times. He went from being just the new person to a webmaster and with his HTML and CSS skills, along with knowing how to work the Zelda Temple CMS, he would be a very good asset to the site and the forums alike.

June 13th, 2009, Zelda Temple was given the "Best Designed" award from Ordon Village. This was based on previous layouts before version 7.

End of 2009, Zelda Temple left the Stone Watchers due to certain issues between the Masterminds and Yusei, herself.

August 22nd, 2010, Version 9 is released early for fans and still being worked on. A Forum skin and gallery skin matching it will come soon.

September 5th, 2010, Zelda Temple was accepted once again as one of the Masterminds of Zelda Wiki.

Currently, Zelda Temple forums are on a vBulletin forum, which grow larger with each passing day.

Over the course of its lifetime after being split from Forsaken Legend, Zelda Temple went through many of forum systems, each with their own pros and cons. First was PHPBB3 which was nice, but the styling was a bit hard, as well installing mods was hard. Then it went to IPB for a time, but that also went away with the lack of an easy way to make skins. Then we went to SMF, which had a decent amount of good mods, but lack of good themes and it was VERY HARD to make a custom theme not based on the default theme. Burning Boards forum system had very little English support, but the theme system was nice. MyBB was the best of the forum systems, although well behind the current Vbulletin forum. The MyBB forum was easy to make themes, and the owner, Yusei, had made two themes on it: Green Forest and Dark Forest (a brownish theme skin). The current Vbulletin one is still being worked on in terms of themes, but in the near future, will be just like the MyBB forum and will have it's own theme and not some free download one.

The SeVIIenth Fantasy (shortened to TSF) is a game being developed by Tin_Man, an administrator of the Zelda Temple forums, as well as co-webmaster.

Ganondorf the Gerudo King of Thieves attempts to steal Hyrule's "Fantasy", the guardian artifact in that realm which governs and keeps the realm stable. Link is unable to stop Ganondorf and Ganon steals the Fantasy. As well, in Gaia, Sephiroth steals Gaia's Fantasy. Four others are stolen as well and the realms falter and collide into one another creating a seventh realm... as well as a Seventh Fantasy. This Seventh Fantasy then acts as a failsafe to prevent the six realms from completely falling apart and only keeps them together until the six other Fantasies are brought back together to their respective realms.