Please improve it as you see fit. Editing help is available.
This article has been flagged since February 2013. 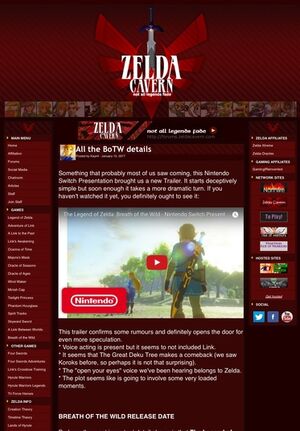 Pending relaunch
Zelda Cavern is a fansite for The Legend of Zelda series.

Zelda Cavern was founded in 2000, near the release of Majora's Mask, Oracle of Seasons, and Oracle of Ages. It merged with Zelda Fusion, another fansite, circa 2006; the Zelda Cavern name was retained, and Zelda Fusion's webmaster joined the site's staff. Zelda Cavern hosts game information, walkthroughs, and reviews, and includes features such as forums and an IRC network called Windfyre.