The Odyssey of Hyrule 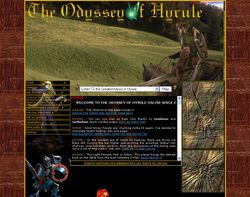 The Odyssey of Hyrule (OoH) was founded by Video Gamer X (VGX) in April 1998 and is considered one of the major Zelda sites of the late 1990s. The site gained popularity through its efforts in uncovering glitches and Gameshark codes for Ocarina of Time. Spinoffs for Majora's Mask (The Oddity of Hyrule) and The Wind Waker (The Fairytale of Hyrule) were created but never came close to the popularity of The Odyssey of Hyrule (Although a significant group of message board members arrived through The Oddity of Hyrule). VGX redesigned the site for Twilight Princess, but updates ceased in March 2006. Odyssey of Hyrule's host has discontinued their operations and VGX claims that he no longer has control of the content. Recently, however, the site was "rescued" by the owners of vgchat.info. Thus, the site has moved to a new URL. On January 25'th 2012, the Odyssey of Hyrule finally acquired a domain of its own at odysseyofhyrule.com.

VGX had an active message board until September 2001, when all of its members packed up and left to form their own board, a secession that stemmed from an incident concerning VGX's views on the September 11th terrorist attacks. The board still exists today as Khakain.

Khakain is a closed and hidden community that formed from the Odyssey of Hyrule. It lives in extreme privacy and obscurity, and wishes to stay that way.