Please improve it as you see fit. Editing help is available.
This article has been flagged since 2 28, 2010.

The Legends of Zelda 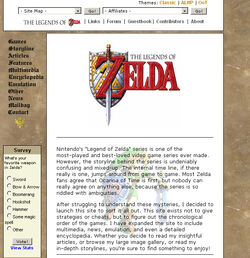 The Legends of Zelda was the first fan site to analyze the Zelda storyline. It soon became famous for its in-depth Storylines, Articles, and image gallery. Over the years it kept growing as more and more storyline resources were added: Quote FAQs, text dumps, interviews, a mailbag, an Encyclopedia, a Bestiary, and more.

Created by davogones, Legends of Zelda was officially launched on January 1, 1999, at http://jump.to/zeldalegend. As it grew, davogones decided to move the site to a real host. Khuffie offered hosting at Zelda Legends, so the site moved to http://loz.zeldalegends.net in August 2000. The site continued growing, so Khuffie and davogones decided to merge their separate sites to form the new Zelda Legends. The merger was officially complete on November 11, 2003.