Please improve it as you see fit. Editing help is available.
This article has been flagged since 2 28, 2010. 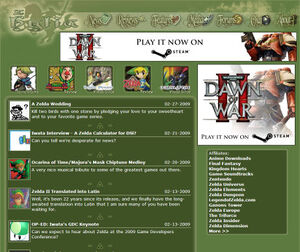 The Hylia was founded on October 1st, 2005 by Mike "TSA" Damiani and mdta|Martin "mdta" Anderson as the successor to TSA's previous site, ZHQ2. Its creation was a response to the criticism over the failed attempt at a revival of Zelda Headquarters. The name "Hylia" is meant to represent the people of Hyrule, rather than a location, in order to place emphasis on the community aspect. In the original layout, the Hylian text in the banner image translated to, "One's first step in wisdom is to question everything and one's last is to come to terms with everything."

At its launch in 2005, the site was a static, SHTML based design before finally changing to a Cute News in mid-2006. The current layout was designed by world-famous Cosplayer PikminLink. The Hylia originally specialized in news updates and feature editorials, though it eventually became most recognized for its video guides and soundtracks. A combination of fast-paced updates and TSA's brash personality earned the site notoriety. The site's 2006 April Fools prank involving a fake interview with Eiji Aonuma drew harsh backfire from the community, as did occasional outbursts by TSA.

Controversy aside, the site provided unmatched coverage of Twilight Princess. The Hylia conducted extensive the on-site coverage of the game's Wii debut at E3 2006, provided hands-on reports at various preview events in the fall before the game's release, published one of the first officially recognized reviews, delivered a comprehensive video walkthrough of both versions, and documented the entire postmortem session at Game Developer's Conference 2007.

Atfer the release of Twilight Princess, the site shifted away from strictly covering Zelda to all things Nintendo. At E3 2007, TSA represented the site at Nintendo's Media Briefing during his on-stage demonstration of The Legend of Zelda: Phantom Hourglass. In October 2007, after leaving to work on his new site Zentendo, TSA sold the website to Yusuf Mullan. Before leaving The Hylia, TSA promoted Daniel Friedlaender as the new Webmaster of the website.

In October 2003, Realms of Hyrule was launched through ZHQ2. Realms of Hyrule is a massively-multiplayer text-based online role-playing game created by Kevin "Hermit" Daniels, Melora and TSA. Their goal was to recreate the "Hyrulean Adventure" interactive story from the 1995 Nintendo web site. The RPG moved to its own server following the transition of ZHQ2 into The Hylia. It is currently the largest Zelda-based RPG forum in existence.

In October 2005, TSA closed ZHQ2 and opened a new site, The Hylia, in order to change focus from basic Zelda coverage to a more news/editorial oriented fan site.