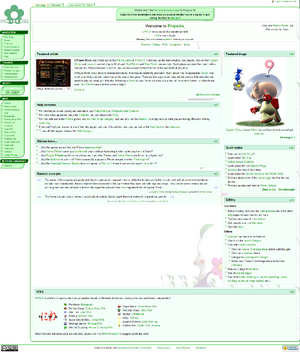 Active
Pikipedia is an independent wiki, owned by Greenpickle, that covers all aspects of Nintendo's Pikmin franchise and relevant spin-offs, such as the Super Smash Bros. Series. Formed on Wikia by Dark Lord Revan in 2005, the wiki grew to sizable proportions before moving to an independent server, with the help of the staff and editors of the Nintendo Independent Wiki Alliance in September of 2010. Pikipedia became the fifth wiki drafted into NIWA on October 8, 2010.

Until August 31, 2020, Pikipedia and Pikmin Fanon were sister wikis that shared the same server. Despite their content differences, these two wikis are both NIWA inductees, drafted into the organization on the same day, October 8, 2010. Although both wikis still cover the Pikmin franchise, Pikmin Fanon is now run under Tacopill instead.