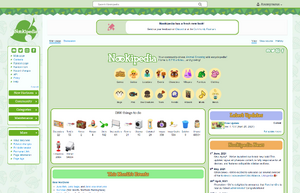 Nookipedia is an independent wiki that covers all aspects of Nintendo's Animal Crossing series and relevant spin-offs, including partial information on the Super Smash Bros. series. Nookipedia is currently run by Jake and SuperHamster.

Nookipedia was first started in July 2010 by Leem01 as Animal Crossing Wiki, but was shut down due to a database issue. The site was restructured in October 23, 2010 by Jake.

At the same time as Animal Crossing Wiki's revival, another wiki, Animal Crossing City, hosted on Fandom and created by Aeryka on August 2005, saw many of the wiki's members grew discontent with a mandatory skin change. They decided to merge with Jake's wiki, bringing along many of their articles to the site. Not long after, Animal Crossing Wiki was inducted into the Nintendo Independent Wiki Alliance as the organization's fourteenth wiki on November 19, 2010.

Animal Crossing Wiki would eventually change its name to Nookipedia, coinciding with a new layout on January 1, 2011. Nookipedia's layout was then updated to a Vector-based skin in November 2017, before adopting a Timeless-based skin on June 1, 2021. In early 2020, the wiki officially adopted a new logo, which began usage in March 2020.

Nookipedia currently hosts 8,785 pages as of June 10, 2021. It is a major contributor to the ACNH Spreadsheet for Animal Crossing: New Horizons, as well as providing a database for the original Animal Crossing via the ACGC Spreadsheet.