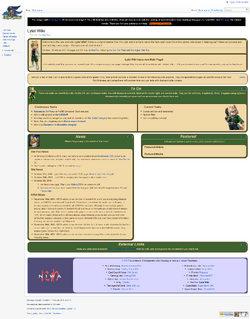 Lylat Wiki is an independent wiki, founded from within the Nintendo Independent Wiki Alliance by Justin Folvarcik in August of 2010, that focuses on all aspects of Nintendo's Star Fox franchise, and relevant spin-offs such as the Super Smash Bros. Series. Lylat Wiki was formally inducted into NIWA on October 2, 2010 (the fourth to be inducted), and subsequently merged with Wikia's Star Fox wiki, Arwingpedia, to great success. The site is currently owned by Tacopill. Justin transferred ownership of the site to Tacopill when he became unable to continue to pay the hosting costs.