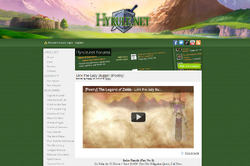 Hyrule.net was founded by Dustin in December 1998. Hyrule.net was once one of the most popular Zelda sites on the internet, however, due to periods of inactivity, the site dwindled severely in popularity. The site was known for one of its unique features: The Zelda Chat Network, which allowed Zelda fans from any site to come together and chat about Zelda. Hyrule.net also gained a great deal of popularity by giving away various prizes such as a Nintendo Wii, a Master Sword replica, and other various prizes with donated money and sponsorships. It is sometimes referred to as "Hnet", a term coined by Sahaqiel, one of the userbase.

Hyrule.net Radio is a Zelda radio station that people worldwide can tune into and listen to their favorite ZREO Tracks. After 93dt took over Hyrule.net's Multimedia, he took down Hyrule.net Radio for 4 months while he claimed to be working on "A Secret Project". This project stayed secret to the Hyrule.net Community until December 2009 when they announced Hyrule.net was designing a completely Digital Radio Station for the Hyrule.net, the first of its kind.

Although we knew what was being planned, things stayed under the hood until March 2010 when they finally launched Hyrule.net Digital Radio, which broadcasts 24/7 Soundtracks, mostly from The Legend of Zelda Series, however has a large variety of other shows covering other games. The station broadcasts in Normal Quality (128 Kbps) and Full HD (320 Kbps).

The Zelda Chat Network (TZCN) was launched along with Hyrule.net to create a place where Zelda fans at any website could come together in one place to chat. The philosophy behind it was many individual website's chat rooms are often empty and lack visitors, but by creating a centralized chat room for multiple websites to be a part of, a more active chat could be formed.

TZCN currently connects to the IRC network located at irc.hyrule.net. Visitors are welcome to connect through the Java-based interface or directly to IRC using an IRC chat client. Visitors may register their name and even create their own personal chat rooms.

Despite its support among multiple Zelda fansites, it is still dwarfed in size by the chat rooms of Zelda Universe and ZeldaInformer.

The month of February 2010, Zelda Dungeon decides to join on Hyrule.net's #Zelda. Portal to Hyrule unofficially joined TZCN in February, but has since dropped out temporarily due to IRC applet complications.[1] DekuLink plans to officially (re)join TZCN eventually.[2]

MyHyrule.net was founded by Dustin around 2005. It allows Zelda Fans to create your own free website with free hosting. Originally user URLs were in the form of my.hyrule.net/(sitename). However, they have since been upgraded to include (sitename).myhyrule.net by user demand. Users are also given the option to acquire one free Gmail-powered @myhyrule.net or @zeldafan.net email address when using the service.

Unfortunately, due to not enough dedicated time to manage, myHyrule.net was discontinued in 2011.

ZeldaFan.net was founded by Dustin in December 2006. It allows members to post and maintain artwork, galleries, blogs, and create their own site in the form of sitename.zeldafan.net. ZeldaFan.net is part of the Hyrule.net network. Users can get one free @zeldafan.net or @myhyrule.net email address powered by GMail.

ZeldaFan.net was also discontinued in 2011, due to lack of dedicated time.