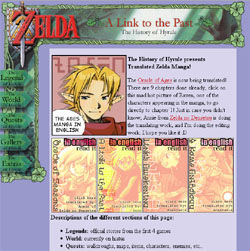 Screenshot of the History of Hyrule homepage

On May 22 2002, Melora launched History of Hyrule on the Angelfire free hosting service. The site very quickly out-grew the bandwidth restrictions and Melora was forced to move to a private server where she purchased the History of Hyrule domain name. It was at this time that she also merged her separate Angelfire Zelda manga website with History of Hyrule.

As a site that focused on the older games in the series, notability ignoring the Nintendo 64 classic, Ocarina of Time, History of Hyrule was very much a niche website. It gained prominence through its readership and without an affiliation program to promote it with the larger Zelda websites of the time.

The original purpose of History of Hyrule was to fill the gap in coverage for the first four Zelda titles. Notably the official-art for these games; which was almost non-existent at that time on the internet. Not long after opening, History of Hyrule had, by far, the most comprehensive gallery for these games on the internet. It soon became a rare media site and began to be known for manga and doujinshi as well as fanart. Much of the Zelda art on the internet, from these games, came from History of Hyrule. This same art also made it possible to complete the, at the time unknown, canon names of the enemies in A Link to the Past. Melora also provided early scans to TSA of ZHQ2.com and TheHylia for The Wind Waker and later provided high-res scans for games such as Ocarina of Time for ZeldaLegend.net as well as the Zelda Box artbook and guide. By the end of 2004, History of Hyrule had over 4000 pages of scanned Zelda manga and doujinshi.

Late in 2002, Melora contacted Annie of Zelda no Densetsu, the original translator of the Zelda manga, and asked if she could help with Annie's translation project. The two teamed up shortly thereafter; Melora would scan and edit the manga that Annie translated, and later they ran a forum together on History of Hyrule's server. One of the highlights of this time was when, thanks to Annie contacting them, the duo received Akira Himekawa's blessing to continue their translation project.

In 2004, Melora's health quickly declined and, due to this, and direct plagiarism of her work by various other well-known sites of the time, Melora closed History of Hyrule and put it on a hiatus status. In 2006 the index page was changed to reflect a change of Melora's opinion and personal status and, finally, the most recent change was in 2008 when Melora used the index page as a way of restarting her well-known translation projects of Zelda manga and doujinshi.