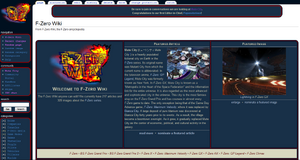 Active
F-Zero Wiki is an independent wiki about Nintendo's F-Zero series. The wiki began at Wikia on November 6, 2007, moved to independence on January 2, 2011, and joined the Nintendo Independent Wiki Alliance as the alliance's nineteenth member on March 16, 2012. The wikis is the founding part of MuteCity.org, the web's first major F-Zero community.

F-Zero Wiki was originally founded on Wikia in November 2007. The wiki was hosted on Wikia for about three years before moving to an independent site in early 2011. F-Zero Wiki had their public launch on July 24, 2011 and have since continued to grow. In early 2012, the wiki elected their first Editor-in-Chief, Popenotorious. The wiki was inducted into NIWA on March 16, 2012.