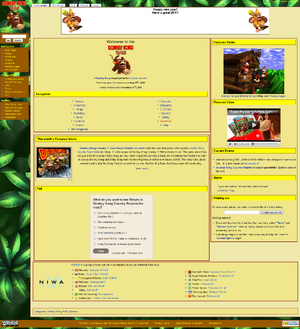 The site was founded on May 25, 2008, two days after the Mario Party Wikia was founded. The two were former sister sites until the DKWikia's move. Initially, contributors from both sites helped, but after a short period of time, the Donkey Kong Wiki would see a drop in activity. There were low community efforts, and the Wikia version founder himself soon stopped contributing. Thus desperateness led whatever users were left to take article content and images from Super Mario Wiki in order to make up for what wasn't on the wiki already. However, even after, the wiki was still short of many, many articles and the remaining users abandoned the wiki, save for some random contributors.

The site would later see a revival in activity once site leader HavocReaper48 had joined the project. He, being a large Donkey Kong Country fan himself, would help overhaul the site with a spark of activity thanks to his own efforts and additional help from editors from various wikis (notably SmashWiki). Havoc quickly became an administrator and later bureaucrat. One of the older inactive admins, The Forgotten Beast, even came back out of a hiatus.

However, the site experienced much trouble when Wikia had made its "Oasis" skin mandatory. This skin, which was an extremely controversial decision made by the Wikia Staff, would force the wiki to secede from Wikia in order to continue the emphasis on content.