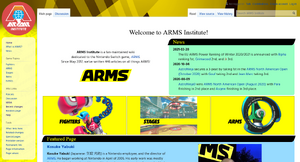 ARMS Institute is an independent wiki on the 2017 video game ARMS by Nintendo. It was originally founded on Miraheze on May 5, 2017 by Gomtuu, but within the next month had moved to a independent domain. It joined NIWA not long after the move on June 22, 2017, becoming the 24th member.