Zelda Wiki
Register
Don't have an account?
Sign In
Advertisement
in: Abilities, Mechanics, Abilities in Majora's Mask,
and 19 more 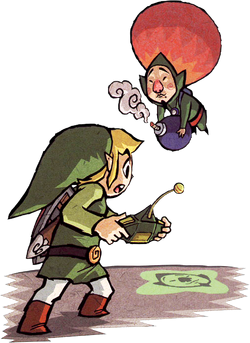 Command is Link's recurring ability to take control of another character in The Legend of Zelda series.[1] A mixture between direct and indirect control of secondary characters can be exercised when Link is transporting with the help of another character. Epona takes Link from one place to another by running forward, but it is Link who steers her in the proper direction, gives her acceleration, and stops her. He can attack with the Bow or the Sword from this position. Various other characters in the series, including Ricky, Moosh, Dimitri, and Kargaroks can be controlled in a similar way.

In Majora's Mask, Kafei can be temporarily controlled while navigating the puzzles of Sakon's Hideout. This command is indirect, since he and Link independently travel across the complex in order to retrieve the Sun's Mask during the sidequest.

In The Wind Waker, Link can command different types of characters. These include a Seagull with the use of a Hyoi Pear, which gives access to items out of reach such as Rupees and switches. By playing the Command Melody, Link can control either Medli or Makar, as well as the statues in the Tower of the Gods. The Tingle Tuner enables the command of Tingle, wich can drop Bombs, sell Potions, or make Link float in mid air.

In Twilight Princess, Link can control Cuccos after repeatedly attacking them. The Dominion Rod allows Link to command Armos Statues and other statues of that nature. He can swing the Rod to make them do an action, like swinging a hammer. The battle against Armogohma requires the use of the Dominion Rod.

In Phantom Hourglass, Link can take control of Gongoron during the Goron Temple, also been used to defeat the temple's boss Dongorongo. He is also controlled on Dee Ess Island.

In Spirit Tracks, Link can control Princess Zelda while in her Phantom form. After gaining three Tears of Light, Link gains the ability to harm Phantoms. Upon doing so, Zelda lunges in and takes control of the Phantom, with different Phantoms having different abilities.