Zelda Wiki
Register
Don't have an account?
Sign In
Advertisement
in: Hyrule Field, Ruins, Locations, Locations in Breath of the Wild 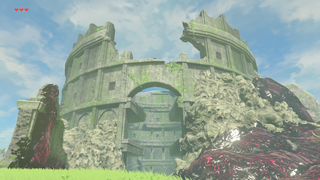 The Coliseum Ruins are a location in Breath of the Wild.[1]

The Coliseum Ruins are located in Central Hyrule, northwest of the Great Plateau. The Ruins were once an arena for combat but has since become run-down and overrun by monsters.[2][3] Pools of Malice coat the outer walls while several monsters patrol the interior. A Lynel can also be found in the center of the Coliseum. Weapons wielded by these enemies and the Lynel both scale up depending on how many Divine Beasts have been freed. If the four Beasts are released, all the enemies inside will carry elemental weapons. Due to the danger it poses, only scavengers such as Dai approach the Ruins in search of Weapons and treasure,[4][5] though he hides behind a wall among the rubble outside them. Bomb Barrels can also be found among the rubble and Malice.

A Korok can be found under a Rock on the northern wall of the Coliseum. Another Korok can be found by completing the Race puzzle activated by standing on the Tree stump on top of a dead Tree surrounded by Malice northwest of the main Ruins entrance.