Not to be confused with Great Moblin. 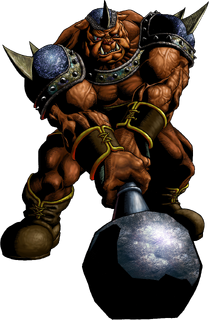 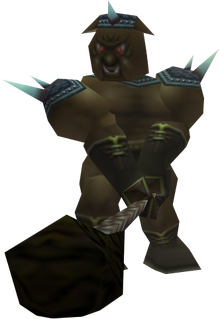 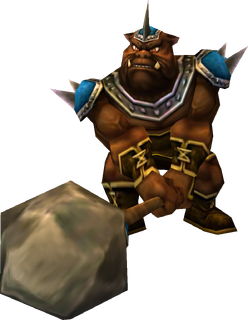 A Club Moblin stands as the final obstacle between Link and the Forest Temple. It easily surpasses the height of its Sacred Forest Meadow counterparts, and with that, it also boasts new techniques that enable it to protect the Forest Temple from entry. It wields an enormous club, which creates shock-waves upon striking the ground. In Ocarina of Time 3D, a brief scene shows upon encountering the Club Moblin for the first time, showing it laughing at Link. In Master Quest, another Club Moblin appears in the Spirit Temple.

Before obtaining the Bow, which is the most efficient method of defeating them, Link can release Bombchu at the Club Moblin to attack from a distance. If Link has none, he must run towards the Great Moblin, dodging the shockwaves. After being struck, the Club Moblin takes some time to recover, allowing Link to sneak behind it. Once surpassed, Link can slash it with the Sword from behind. Because it is immobile, the Club Moblin is unable to turn around and face Link.