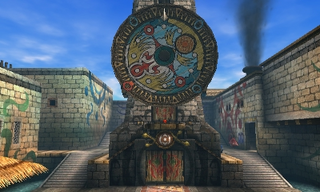 South Clock Town
Portal
The Clock Tower is a location in the center of Clock Town in Majora's Mask.[1]

The Clock Tower plays a key role in the events of Majora's Mask, as it is where the climax of the game takes place. It is composed of a giant Terminian Clock, and it also emits a ray of light from atop the tower during the night, serving as a lighthouse of sorts. Every time Link plays the "Song of Time" to return to the dawn of the First Day, he will always start in front of the entrance of the Clock Tower regardless of where he was prior to playing the melody.

The inside of the tower, which can be accessed through a set of double doors at the foot of the tower, holds the only known Portal between Hyrule and Termina; however, once the portal is entered in the beginning of the game, it remains inaccessible afterwards. The inner part of the tower consists of two floors which are connected by a long ramp. The bottom floor contains a waterwheel propelled by a small river, and the waterwheel in turn helps mobilize the inner workings of the tower, including the part of the tower that functions as a lighthouse as well as the Terminan Clock itself.

The Clock Tower is the main attraction during the Carnival of Time. Every year at midnight on the day of the Carnival, the tower falls over, causing the clock face to be level with the ground. Along with this, the tower reveals stairs to the roof, allowing people to climb to the top by using the ramp leading up to the clock located to the side. This permits the citizens of Termina to stand on the clock face as they make their prayers and sing ceremonial songs to the gods.[2] The Carnival of Time is the only occasion in which any normal person can go atop the Clock Tower.[3]

In Majora's Mask 3D, the back of the tower now features the Clock Town Bank.

Role in the Game

When Link first arrives to Termina, he stumbles into the inside of the tower via the portal. It is here that he meets the Happy Mask Salesman for the first time, and it is also here that the hero is charged with the task of recovering Majora's Mask from the Skull Kid.

Link can find the Skull Kid standing at the top of the Clock Tower by looking through the giant telescope located in the Astral Observatory. Professor Shikashi mentions that the Skull Kid's presence at the tower is odd, also indicating that the way up to the Clock Tower only opens on the eve of the carnival.[3]

Once Link retrieves the Ocarina of Time from the Skull Kid and learns the "Song of Time," Link must go back to the Clock Tower so that the Happy Mask Salesman can teach him the "Song of Healing," obtaining the Deku Mask as well during the process.[4]

At midnight during the Final Day, the stairs drop down as the Carnival of Time begins, allowing Link to go up to the tower to face-off with the Skull Kid. Here, Link can summon the Four Giants using the "Oath to Order" once all four of the Giants have been freed from their respective dungeons. Moreover, the Clock Tower serves as the access point to the Moon, which is made by Majora's Mask after it abandons the Skull Kid's body.

Inside the Clock Tower is one of the only places in the game where time stands still. Any melodies relating to time, such as the "Song of Time" or "Song of Double Time," will have no effect while inside the tower.