"The ancient technology in this gear will make you a better climber. The special no-slip gloves help you use your energy more efficiently to facilitate nimble climbing"
— In-game description

The Climbing Gear is an item in The Legend of Zelda: Breath of the Wild. It is body armor created for climbing with ancient technology and equipped with no-slip gloves that allow Link to climb faster. It can be obtained inside Chaas Qeta Shrine from a Treasure Chest. It grants Climb Speed Up when worn which increases Link's climbing speed. It is part of the "Climbing" armor set along with the Climber's Bandanna and Climbing Boots.

After completing the Side Quest "From the Ground Up", Link can purchase it from the Rare Armor Shop allowing Link to reacquire it if he sold it.

If upgraded to Level 2 (★★) or higher along with the rest of the armor set it grants the Climbing Jump Stamina Up set bonus which reduces the amount of stamina required to jump by 50% while climbing when the entire set is worn. 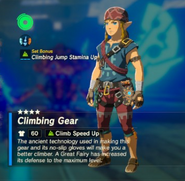 Retrieved from "https://zelda.fandom.com/wiki/Climbing_Gear?oldid=542046"
Community content is available under CC-BY-SA unless otherwise noted.