Upgrading the set to at least level 2 and reduces the stamina required to jump while climbing by 50%. Climbing is still more stamina-efficient, but the difference in stamina usage between climbing and jumping becomes much smaller.

After completing the Side Quest "From the Ground Up", Link can purchase it from the Rare Armor Shop allowing Link to reacquire it if he sold it.

If upgraded to Level 2 (★★) or higher along with the rest of the armor set it grants the Climbing Jump Stamina Up set bonus which reduces the amount of stamina required to jump while climbing when the entire set is worn. This makes the armor set ideal for climbing. 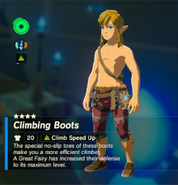 Retrieved from "https://zelda.fandom.com/wiki/Climbing_Boots?oldid=542045"
Community content is available under CC-BY-SA unless otherwise noted.