Zelda Wiki
Register
Don't have an account?
Sign In
Advertisement
in: Dungeons, Locations, Dungeons in Twilight Princess,
and 4 more
English 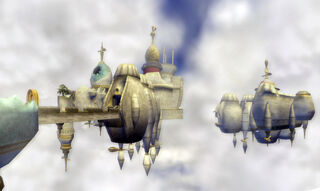 The City in the Sky from Twilight Princess

"City in the Sky"
Twilight Princess

City in the Sky guide
at StrategyWiki
The City in the Sky is a recurring location in The Legend of Zelda series.[1][2] It is the seventh dungeon in Twilight Princess.

Entrance to the City

The dungeon can be accessed only after paying Fyer 300 Rupees to repair the broken Sky Cannon.[3] This cannon must first be warped with Midna's help to Lake Hylia after it is discovered beneath the Kakariko Sanctuary.

Unlike the previous six dungeons in the game, the City in the Sky is not set in Hyrule, but in the heavens,[4] where another civilization can be found.[5] This city is where the Oocca tribe live and is the final dungeon where Ooccoo and her son appear as items.[6] It is said the City in the Sky prospered because of their advanced technology.[7]

The city runs on many ancient and complex machines that are far more advanced than anything found in Hyrule, including spinning propellers that keep the city aloft and fans that generate powerful winds. These machines use the power of the wind to its full extent; it powers every major machine that Link comes across. The city also features automatic doors.

As access to the city is only made possible with the Sky Cannon, Link enters the dungeon by falling into a pool of water to break his fall. To the east of the pool is a shop run by an Oocca that sells a few various items.[8]

The dungeon features many high-altitude platforms, including towers and narrow walkways over bottomless drops. Powerful winds outside, as well as fans inside the city structure, attempt to push Link off of these platforms. Link can wear the Iron Boots or carry the Ball and Chain to avoid being pushed off by the wind. After Link obtains the second Clawshot after defeating the mini-boss Aeralfos, forming the Double Clawshots, exploration is much easier, as the young hero can now climb between walls, as well as hold on to Peahats and moving walls to advance.

The dungeon's boss is the Twilit Dragon, Argorok. After it is defeated, Link and Midna obtain the last of the Mirror of Twilight's Shards and a Heart Container.

In Link's Crossbow Training, the City in the Sky appears in two stages. It first appears as a Target Shooting Mode scenario in Stage 5. Oocca fly across the screen carrying targets. Link moves to a new view after each 20 second phase of the level, but there is no remarkable difference among them.

The City also appears as a Defender Mode scenario of Stage 7. It takes place in the same area as the Argorok battle in Twilight Princess, with many Aeralfos instead of an Argorok. Link stays in a fixed position, but must search all 360 degrees, high and low to hunt down the Aeralfos. The Aeralfos can be grounded by shooting their wings off, but their shield is capable of blocking most oncoming shots. Alternatively, Bomb Arrows can destroy them in a single hit.