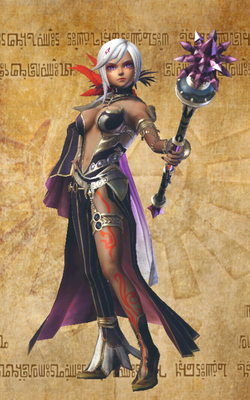 Cia is a major antagonist and villain in Hyrule Warriors.[citation needed] In the version 1.3.0 update, she is also a playable Warrior. She is a powerful sorceress who wages war over the land of Hyrule in the aim to conquer it. She also harbors serious affections for Link, and desires to claim him as well.[1]

In battle, Cia is primarily a spell-caster of dark magic. Her Weapon, the Scepter, which also doubles as a whip, allows her to conjure powerful magical attacks. Her battle style primarily relies on area coverage and long-range over brute force. Her Charge attack allows her to imbue her attacks with the Dark Element and makes her resistant to flinching. Her initial combo attack can hit an incredibly wide area that allows her to build her Special meter quickly. Her fourth combo string is also able to shred through the Weak Point Gauges of Giant Bosses quickly. She can also summon Dark Links for several of her combos.

When defeated in battle, Cia may either drop her Bracelet as a silver Material, or her Staff as a gold Material.

As the dark half of the original sorceress, Cia possesses many traits from her original form. She can manipulate the power of dark magic, consisting of traps and explosions that activate once touched. The sorceress harnesses the ability to summon Dark Links, although for her to do so would require the hero to be overwhelmed with confidence, or for her to tap into her own life force. In her opening intro, she can assemble her Scepter freely.

Cia was originally a guardian tasked with maintaining the balance of the Triforce.[2] As an observer of the Triforce, her magic allowed her to witness eras of distant ages of Hyrule and the fates of all those who lived, but would never interfere.[3] Although a good person at heart, she came to harbor powerful affections for Link,[1] which in turn became deep-seated jealousy directed towards Princess Zelda.[4]

Preoccupied by these thoughts, Cia was left vulnerable as she was confronted by a spiritual fragment of darkness, belonging to Ganondorf, who saw an opportunity in using her.[5] His words managed to persuade her, ultimately corrupting Cia as her light was pushed away and turning her curiosity into a strong desire for the hero of legend.[6] Ganondorf had split the light,[7] and the light became its own personality, Lana, who became the virtuous side while Cia became the corrupt side.[8][9] Desiring not only Link but also the world itself, Cia then turned to waging a war onto the kingdom of Hyrule by opening the Gate of Souls.[10] Using the Gate, she summoned monsters from other eras to follow her command as the Dark Forces.[11] Alongside them, she had also enlisted the service of Wizzro and Volga as well. Although not explicitly stated, Cia had at one point also managed to acquire the Triforce of Power. Ganondorf however only intended to use Cia as a puppet, directing her to acquire the full Triforce and to free his remaining scattered fragments to resurrect him.[12]

In "The Sorceress of the Valley", the Hyrulean Forces, along with Lana, later encounter Cia at the Valley of Seers after a battle between their Forces. The sorceress manages to steal the Triforce of Courage and the Triforce of Wisdom from Link and Sheik. With the full Triforce in her possession, Cia uses the Gate of Souls by Ganondorf's urging to rip time and space as distant eras are merged into the present Hyrule. This allows three of Ganondorf's sealed fragments to be released from their hold and return to Cia,[13] leaving only one fragment remaining, sealed by the Master Sword.[14] The Hyrulean Forces then resolve and split up to close the three newly opened Gates of Souls in these eras to return Hyrule back to normal. At some point, possibly after the merge, Cia also curses Midna and transforms her into an imp.[15]

Cia is later encountered again in "Land of Twilight", when Lana enters the Era of Twilight to close its Gate of Souls and combats the Dark Forces, and later Midna's Forces. Midna uses Agitha's Goddess Butterfly to track Cia down as revenge for cursing her, but Cia leaves the battle. She again appears in "The Shadow King" after Lana and Midna closes the Gate of Souls at the Palace of Twilight. Midna recognizes her as the one who cursed her, and Cia mocks Midna's new look. The insult enrages Midna and she hits Cia back, knocking her mask off and revealing her face as identical to Lana's.[16] Cia then angrily teleports from the palace, leaving Lana to explain their story to a confused Midna.

Cia then later reemerges into present Hyrule, where she is confronted by a manifested form of Ganondorf. Although lacking full power, he is able to manifest his body's form.[17] Ganondorf breaks their alliance and attempts to take the Triforce from Cia,[18] but she resists him, claiming the Triforce as her own and repels him back.[19] She returns the Triforce of Courage and the Triforce of Wisdom to their respective owners so that Ganondorf may not have them,[20] and then uses the Triforce of Power to send Ganondorf away. She swears to reclaim the full Triforce as well as Link's affection.[21]

After Link acquires the Master Sword to defeat Cia, the Hyrulean Forces travel to the Temple of Souls where Cia awaits, in a palace devoted to the hero of legend with numerous portraits of Link and statues of his incarnations from other eras. The string of victories, as well as the acquisition of the Master Sword, has left Link overconfident and proud in his abilities, which Cia sees as an opportunity to strike. She encourages him to come to her, and then takes advantage of the darkness in him to summon Dark Links.[22] Ganondorf then shortly arrives to take the Triforce pieces, to Cia's anger. The Dark Links quickly overwhelm Link as more spawn, however, his allies then arrive to defend him and bring the Dark Links to a defeat. Cia is enraged by her foiled plan and turns to using her own darkness as a powerful source of magic, despite Lana's pleads of the dangers of this. She retreats, and Ganondorf is also shortly defeated. The Hyrulean Forces then rush to the Valley of Seers for the final fight against Cia.

Although while Cia's army still controlled much of Hyrule,[23] the repeated losses left Cia at a disadvantage and forced her to take desperate action. She tapped into her own life energy to power her army, at the risk of costing her own life.[24] She overexerts her magic to strengthen her powers, and ignores Lana's continued pleads.[25] In the final battle, she faces Link and creates several doubles of herself to fight alongside her. Link however manages to overcome them and defeats Cia in battle, leaving her gravely injured as Lana arrives at her side. Coming to terms with her defeat, Cia admits that neither one of them will earn Link's affection,[26] though Lana accepts this fate.[27] Cia then smiles as she fades away, and relinquishes her Triforce of Power to Lana. Although her defeat seemingly ends the war and brings Hyrule to a period of peace, it is short-lived as Ganondorf's final fragment is freed as a result of the earlier retrieval of the Master Sword.

In the Wind Waker epilogue of Hyrule Warriors Legends, Cia's power was stolen by Phantom Ganon. Lana senses Cia's presence, but only to find out that her magic is being drained by Dark Cia, who wishes to become just like Cia.[28] With the help of Tetra, Link, and the King of Hyrule, Lana manages to defeat Dark Cia and save her. When the thief of Cia's magic is finally revealed to be Phantom Ganon,[29] Cia is instrumental to the group's success despite her weakness, as she can subdue their foes' dark magic.[30] Once Phantom Ganon is destroyed, Lana and Cia together return to Hyrule with Link and resume their roles as guardians.[31]