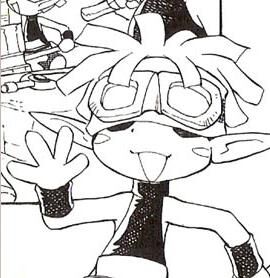 Chiruta is a character in The Minish Cap manga by Akira Himekawa.[name reference needed] He is one of the Mountain Minish and helps Link in his quest to get the Fire Element.

Chiruta is first seen running away from an attacking wasp which Link swats away. Link then shrinks down to Minish size and he and Chiruta go to the Picori Mountain Village to fix the Picori Blade, only to find Melari has quit being a blacksmith due to the death of his wife. Link and Chiruta soon go to the Cave of Flames to find the Fire Element. After a few mis-adventures, such as riding a mine cart and nearly falling into a pit of lava, they find the Cane of Pacci as well as a Gleerok. After they defeat Gleerok and obtain the Fire Element, they go back to the Mountain Village. The power of the Fire Element transforms the rocks around the village into iron ore. After showing the iron ore to Melari, he and his workers set to work on fixing the Picori Blade. Chiruta is seen later finishing off the Picori blade with Melari.

Minish in The Legend of Zelda series
Community content is available under GNU Free Documentation License unless otherwise noted.
Advertisement