Zelda Wiki
Register
Don't have an account?
Sign In
Advertisement
in: Gorons, Characters, Characters in Four Swords Adventures,
and 2 more 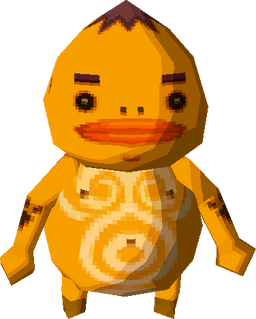 In Phantom Hourglass, Child Gorons reside on Goron Island, where they are almost as numerous as their adult counterparts. Child Gorons exhibit the same tribal pride and manners of speaking as grown-up Gorons,[2] but they have a predilection toward playing as well as a variety of personality traits.[3] One Child Goron seems annoyed by his father's obsession with with Linebeck's Ship,[4] and another one rewards Link with a Treasure Chart for defeating a group of Yellow Chuchus which have appeared on a nearby hill.[5] Some readily welcome Link to their homeland,[6] with several even willing to call the young hero "Brother" before he has officially joined the tribe,[7][8] while others are more hesitant to trust him,[9] including the island chief's son, Gongoron.[10] Child Gorons also appear on Dee Ess Island, where they help to set up and manage the Goron Game.

While the average maturation period of a Child Goron is unknown, one particular Child Goron is shown to grow into a full-sized Goron by the time Link has completed the Goron Temple.[11][12]

Several Child Gorons appear in Spirit Tracks. One is the Goron Elder's grandson, who is known simply as the Goron Child. After Link completes the Fire Temple, the Goron Child asks Link to take him to Castle Town, as he would like to experience life in the "big city" and hopefully meet a Princess in-person.[13][14]

A different Child Goron manages the Goron Target Range just west of Goron Village. Another is held captive at the Pirate Hideout, while his friend waits outside the Hideout's entrance to request help from Link; these two Child Gorons appear to perpetually swap places whenever the captive one is rescued.