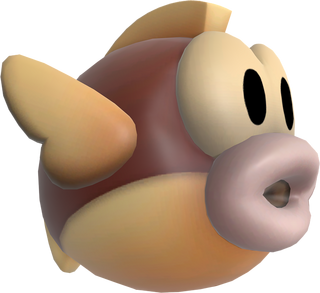 Cheep Cheeps,(LANS)[note 1] also known as Cheep-Cheeps,(OoS | OoA | FSA)[1][note 2] are recurring Enemies in The Legend of Zelda series. They are directly based on the Cheep-Cheep enemies of the Mario series.

Cheep-Cheeps are small fish that are solely encountered in underground side-scrolling areas, usually in flooded caves or dungeon passages. They swim slowly and pose little threat to Link, but can swim in varying patterns horizontally or vertically and make avoiding them tricky in certain instances. In some areas, they leap out of the water to attack Link from below, similarly to Cheep-Cheeps in the Mario series.

In Link's Awakening, Cheep-Cheeps are encountered in flooded, underground passages of dungeons, predominately in Angler's Tunnel and Catfish's Maw. Cheep-Cheeps slowly swim in the waters they inhabit. While they are generally docile, the Cheep-Cheeps in Catfish's Maw will jump out of the water when Link is near, however they can be stomped down if Link is right above them. Cheep-Cheeps are weak enemies that can be destroyed by any manner of attack, including the Sword, which Link can swing while swimming underwater.

In Link's Awakening for Nintendo Switch, Cheep-Cheeps appear in the Fishing Pond and can be caught by Link while fishing.

In Four Swords Adventures, Cheep-Cheeps are once again found in flooded side-scrolling areas of Stages. They swim slowly and are not threatening to the Links, however as the Sword cannot be used underwater, they must simply be avoided. They are encountered at Lake Hylia, The Coast, Desert of Doubt, and Frozen Hyrule. The Big Cheep Cheep from the Mario series makes an appearance and can damage them badly.