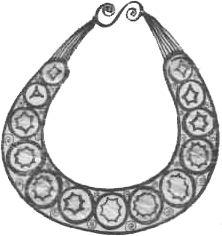 Charles's Necklace as seen in the book

Charles's Necklace is an item featured in The Shadow Prince. As its name implies, it is a necklace that belongs to the knight of Moria, Charles, which was given to him by his great aunt.[1] It is eventually discovered that the necklace is actually what gives Ganon the ability to disguise himself as Charles, and it is the only item that gives him his power.

The necklace is first introduced after Charles saves Link and Princess Zelda from an ambush of Moblins. Link notices his necklace is full of runes, and when he asks Charles what they mean, the knight evades the question and says that it is an ancient relic from Moria, having been passed down in his family for generations.[2] Later on in the book, after Charles arrives to North Castle to meet the King of Hyrule, the king remarks about the necklace and asks if he may see it. However, Charles denies the king's permission with the excuse that he cannot take it off until he becomes king, as spoken of in Morian lore.[3]

Eventually, Dowser, the court hound, comes in and growls at the Morian knight. The dog then lunges himself at Charles's neck, but Zelda holds him back.[4][5] The book then offers a puzzle to give the reader a hint on what upset Dowser. When the puzzle is completed, it spells out the word "NECK," implying that the dog disliked Charles's necklace.

Towards the end of the book, if Link does not have the Blue Ring, he will face off Charles in order to retrieve the Triforce of Wisdom from him. Link will have a choice of either fighting by sword or try to take Charles's necklace. The true ending of the book can only be achieved if Link decides to go for the necklace, who will cut the necklace in two and cause for Charless to fall on his knees, exposing the Morian knight to be Ganon and thus disappearing into nothingness.[6]